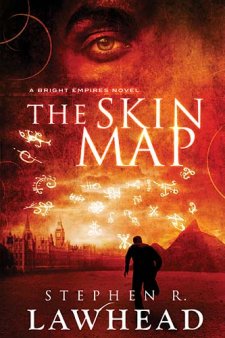 If your great-grandfather, who vanished a century ago, reappeared in a deserted alley and asked you to join him on a mission through parallel realities, would you say yes?

Kit Livingstone said no. Then he went to buy bathroom curtains with his girlfriend, Wilhelmina (!). In an effort to convince her he had a good reason to be eight hours late, he told her he had met his great-grandfather. In an effort to convince her he wasn’t a liar, he took her to the deserted alley. A storm broke over them, and when Kit stumbled out of the alley, he was alone. With a little time, and a lot of help, he came to realize the truth: His great-grandfather hadn’t come into his world. He had gone into his great-grandfather’s. And Wilhelmina, in their tumultuous crossing, had gone into someone else’s.

And so the fun began.

Kit’s world – our world – is called the Home World. Every other world is at an earlier point of our history (or their version of our history). The story wanders from China under the Qing dynasty to ancient Egypt, from seventeenth century London to seventeenth century Prague. And Stephen Lawhead doesn’t give the impression that we’re only passing through. He really enters these eras, giving his novel a flavor of historical fiction.

Lawhead is primarily fascinated with his multiverse, all the times, places, and opportunities it opens up. He is fascinated by those who travel the alternate realities – the great adventurer, the secret society of Questors, the well-heeled pirate, the novice who lands on his feet and the one who lands on his face. In The Skin Map action is not where the action is. Action scenes – defined as fights or chases – can be counted on one hand and exist solely to turn a plot point, not give a show.

How much anyone likes this will depend largely on his tastes. For my part, I enjoy sci-fi without plenty of action as well as with it. In fact, it was refreshing to read an SF novel that managed not to violently whack half a dozen characters.

A noteworthy aspect of this novel is that Stephen Lawhead writes in omniscient third person. He chooses one character to follow in any given scene, as in limited third person, but the narrator is much louder here. For example, he relates Kit’s thoughts and then opines:

At least this was the track his mind ran along at the moment. In a few days he would discover just how wrong he truly was, but by then this train of thought would have reached a wholly unexpected destination.

Another element of Lawhead’s style is that it is British. The Skin Map is permeated by Britishness. My reading of modern fiction has been limited to American books, so that really caught my notice. References to English history and geography are sprinkled throughout. When these people talk about the Great Fire, they don’t have Chicago or San Francisco in mind. The English speaking style is noticeably foreign. Tube station? Oyster card? Tump? Nobbled? Kerbstone? Sprogs?

The Skin Map is a unique book. It has a sense of solidity, of depth. I reached the end with a feeling of satisfaction and appreciation. Don’t mistake me: Spaceships and aliens and explosions and strange, new worlds are a romp. With the right author, it can be profound, too. But The Skin Map is valuable in its own way – and that way is historical science fiction, a multiverse adventure with modern Londoners besieged by life, Egyptian priests, Bohemian alchemists, and English aristocrats of multiple centuries.