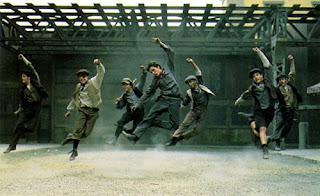 Once a critic complained against the musical Newsies, “[T]he dancing is all performed by teenage boys in vests and newsboy caps. You feel more than a little ridiculous just watching it.”

And he is, of course, right. Newsboys dancing and singing in the streets of New York is pretty ridiculous. And Newsies has plenty of company. Chimney sweeps singing and dancing on the rooftops of London is on the same wavelength of absurdity. And isn’t it silly to imagine an English schoolteacher crooning to the king of Siam about a girl’s first ball? What kind of a nut actually sings in the rain?

Robert G. Lee once remarked, “I have no respect for gangs today. None. They just drive by and shoot people. At least in the old days, like in West Side Story, the gangs used to dance with each other first.” All musicals – even the great classics – are, if you take a long look, ridiculous. Someone once said that in sensible situations people do not sing. That’s only half of it. Even in insensible situations people do not sing, and they never spontaneously perform complex dances together. Never.

But let’s not miss the art for the facts, or enjoyment for analysis. If you can silence your inner nitpicker, you can have a lot of fun with the crooning schoolteachers, and dancing chimney sweeps, and break-dancing newsboys.