In my last post, I criticized Beckon for its high casualty rate. I thought it would be good, today, to consider why characters are killed, and why they ought to be.

One common reason for killing characters is to (in the words of one author) “create peril”. Many poor red 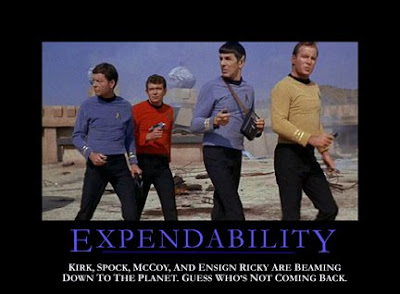 shirts* have lost their lives for this. And much of the time it doesn’t even work. Audiences are wise to the tactic; they are not going to feel peril when a character dies if they know the character died so that they would feel peril.

This is, as I said, commonly done – but I can’t help but think there are better ways of creating peril, and certainly better uses of characters.

Some characters are killed because, simply, the author wants to get rid of them. Although, in the short term, they had their purpose, they have no long-term place in the story. This can be understandable, at times it may even be necessary – but it is always an artistic weakness. It is an artistic weakness to snap a thread because you can’t work its color into the design.

A character may no longer be useful, but rarely is the fault inherently in the character. Even if it is – well, we know who created him. To relate the discussion back to Beckon – and if you don’t want spoilers, go no further – both of Jack’s companions died in the spelunking expedition. His position would have been much different if they had lived; it would have been much stronger, which would probably have been a bad thing.

But it was not necessary for those characters to die even for Jack to emerge from the caves alone. If, say, Rudy had fallen into the hands of the N’watu, Jack could still have gone into Beckon alone and we might have had the opportunity to understand the N’watu. If you take the trouble, you can find tremendous opportunities in unlikely characters.

Yet there are times when death is the proper consummation of a character’s story. Then it can be done with artistic strength – when a character dies not to make the audience nervous or to relieve the author of having to handle him, but to fulfill his own story.

* Red shirts are minor characters who are soon killed, usually as a sort of demonstration of the dangers our heroes face. The name comes from the original Star Trek series, where random crewmen – generally wearing red – would tag along with Kirk and Spock only to die just when things really started to get interesting.