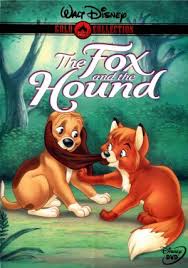 The world has its natural enemies, creatures it pits against each other. Wolves and sheep. Farmer and locust. Hunter and deer.

The fox and the hound.

Disney’s The Fox and the Hound is called a story of friendship. It’s as much a story of enmity, and most of all a story of a confusion of the two. In childhood innocence, the fox and the hound became friends. Then they grew up and learned better.

But if there is a lingering somberness, other elements of the movie strike the Disney chord with great trueness. In an entertaining subplot, two birds hunt a caterpillar with great perseverance and absolutely no success. “That fuzzy worm,” they call it. That side-story captures so much classic Disney: cute creatures, humor, animal antics, it all coming all right in the end.

The shooting of Todd’s mother by hunters brings memories of Bambi – how could it not? And you cannot help but think Bambi did it better. The animation of Fox and the Hound also seems inferior, particularly the fire and smoke. Even so, it’s decent enough, and even rewards the viewer’s eyes with moments of loveliness.

The weakest part of the story is the climactic struggle, when the hunter is attacked by a large, mutant bear. It was as tall as a house, tore down trees, swatted the hound away like a mouse, and had red eyes. It was Godzilla Bear.

Once I found it frightening. Somewhere along the way it became silly. You wonder if there is, somewhere in the game preserve, a secret lab where unethical scientists are performing questionable radiation experiments.

Disney movies have been accused of being coated with sentiment. The Fox and the Hound is coated with pathos. It begins with the orphaning of a baby fox and interludes with a brief and splendid friendship. Then we have the end of the friendship, then it turning to hatred, then the sadness of the old woman as she pushes Todd out into what is turning out to be a cold world. Then she went back to her loneliness, and Amos and Copper went on the hunt.

At the end, there is some redemption – a revival of loyalty, a triumph of the old affection. Yet those very acts of self-sacrificing courage are a final salute to their fleeting, and now fled, friendship. It will not return. In the final moments of the film, we hear the wistful echo of a lost childhood hope: “We’ll always be friends forever, won’t we?” “Yeah, forever.”

“Forever,” Big Mama said, “is a long time. And time has a way of changing things.” Is that the lesson of The Fox and the Hound? Or is it that the world is older and larger than we are, and it has limits we can’t change? No Hallmark greeting card, either one.

The Fox and the Hound has its tenderness and its humor, but I don’t enjoy it as I did when I was little. It seems thinner fare now. But I am still moved by its bittersweet ending, its sense that in a different world the fox and the hound could have been friends.

And maybe, in a different world, they will be. After all, the lion and the lamb are going to lie down together.