Her heart fluttered when she heard the sound of the key turn in the lock. She quickly adjusted her maroon silk sari with the yellow border, the one that had caught his eye, and waited eagerly for his footsteps.

One, two, three, four, five, six, seven… Yes, exactly seven steps before he stopped, hesitated for a few moments, then removed his shoes one by one and arranged them neatly side by side on the shoe rack.

She smiled. He had been mindful of taking his shoes off every day now…

We offer flowers in traditional welcome.
You are our honored guest on our tour…

“In Rao’s debut novel an arranged marriage sets the stage for an intimate look at the exasperating madness of love….An often intoxicating…will-they-won’t-they tale.”- KIRKUS REVIEWS

10/21:
#Dawat-Recipe Intriguing Reads
No discussion on India would
be complete without mentioning its food which is as rich and colorful as its
residents. And I am not kidding when I say that travelling from one region to
another will not only introduce you to different
languages and dialects but
also to markedly varied cuisines.
I still have very fond
memories of my Grandma’s kitchen where food used to be prepared the way it
should be—from scratch. It was labor intensive but also a lot of fun. I know
because I used to help.
10/22:
#Vivaah-Marriage Ritual
The Wonderings of One
Person

Hindu marriages are
all about customs and rituals. There are several both before and after the
wedding ceremony making it a very elaborate affair. But the most important of
them all is the Seven Vows or Saath Pheras which occur during the ceremony
because they are said to contain the essence of the practice of marriage.
Without them a marriage is considered meaningless.
‘Ruhi quietly and
blissfully followed Shaan around the sacred flames carefully listening to and
reciting the Saath Pheras in her mind.’ – An Incurable
Insanity
10/22: #Desi-Indian Culture vvb32 reads 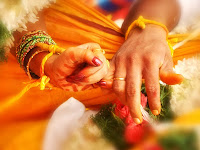 Indians in general are deeply rooted in tradition. Our culture
gives us our identity. Most of us (especially those living away from the
homeland,) cling to it, even though several aspects especially in these modern
times, make no sense at all.
10/24: #Vivaah-Marriage Ritual Giveaway Breaking News for
Indonesia
Cherish your
wife as a blessing sent to you from heaven; let the kindness of your behavior
endear you to her heart.
10/25: #Desi-Indian Culture Christy’s Cozy Corners

“Unclasping the sacred marriage necklace from around her neck, she
laid it down carefully on the counter. Then, wiping off the vermilion dot from
her forehead, she examined her face again.
She smiled. Finally, she knew who
she was. She was Ruhi Sharma, and there was no looking
back.” – An Incurable Insanity

10/25 – #Desi – Shakti “the Divine Woman” – A Casual Fling with the Keyboard
She is bold and liberated. She speaks her mind. She is tough and vibrant. She knows what she wants and doesn’t compromise on her values.
10/26: #Dawat-Recipe Book Babe

“Chai?”
“Huh? Yes please with just a pinch of sugar. Thanks!” He took the cup from her hands, careful not to touch her fingers. – An Incurable Insanity

A cup of this refreshing brew served piping hot, awakens the senses and drives the blues away.

“It was the best pudding he’d ever tasted…for obvious
reasons.” ~ An Incurable Insanity
After all the spicy heat of chai and parathas, let’s cool the
tempers with something sweet and delish!
10/28: #Dawat-Recipe Living a Goddess Life

“Standing in front of
the large bathroom mirror, she combed her long thick hair. Should I leave it
loose or braid it? Should I put on makeup or go bare? Should I wear all my
bangles or just a couple of them? So many questions! Why don’t all men come with
a user guide?”

She had gone through all the
miscellaneous ceremonies associated with the typical grand Indian wedding—the
engagement, the Mehendi, the Sangeet, the Haldi, and the grand finale; her
father had spared no expense… – An Incurable
Insanity Mehendi
(Henna) is derived from the ancient Sanskrit word Mendika. The tradition of
applying it is several thousands of years old and is perhaps the most
traditional form of body art. It is meant to ‘awaken the inner
light’.
10/30: #Vivaah-Marriage Ritual Mel’s Shelves

The bombshell had dropped on their wedding night. He had walked into the room late as she sat there, a shy bride in all her wedding finery waiting, nervous yet excited at the same time, to meet the man she had hardly spoken to or looked at. What would he say, talk about, or do?
She had heard a lot of stories about what to expect, some factual and some fabricated (her friends had prepared her well), but she wanted her own to be special, unique, and it was…
– An Incurable Insanity
10/31:
#Desi-Indian Culture Shannon McDermott

He pinched a small amount of the red powder and placed it firmly in
the parting on her forehead. Not entirely certain why, but this makeshift
ceremony appeared more meaningful to him than the one on his wedding
day.
“Perfect! Now my mishti
bon looks like a bride, a very
beautiful bride.”

Paratha [par-AA- THA] Hindi पराठा is one of the most popular types of unleavened flat breads in Punjabi North Indian Cuisine and Pakistan.
Prepared from pan frying whole wheat dough which usually has ghee (clarified butter) or cooking oil in it, parathas are often stuffed with vegetables such as mashed boiled potatoes or aloo, cauliflower (gobhi), radish (mooli), other vegetables and or paneer (fresh Indian cheese).
Parathas, particularly the stuffed ones, are simply eaten with pickles, chutneys and or yogurt on the side and make for a wholesome meal at any time of the day.

In my book ‘An Incurable Insanity’ my protagonist Ruhi, when she first arrives in America, longs for home, the feel of her mother’s pallu (sari’s edge) and for the taste of fresh homemade parathas and piping hot chai. Simi K. Rao was born in India and has been living in the United States for several years. The inspiration for An Incurable Insanity came from what she has seen transpire among and within the immigrant community. Some of the experiences included are her own; some have been garnered from friends and casual conversations with acquaintances…