I am pleased to announce that the cover of The Valley of Decision (due to be published May 31, 2014) has been completed. Some of the concept art centered around mountains, valleys, and the image of a soldier, but I’m glad we went with this one. 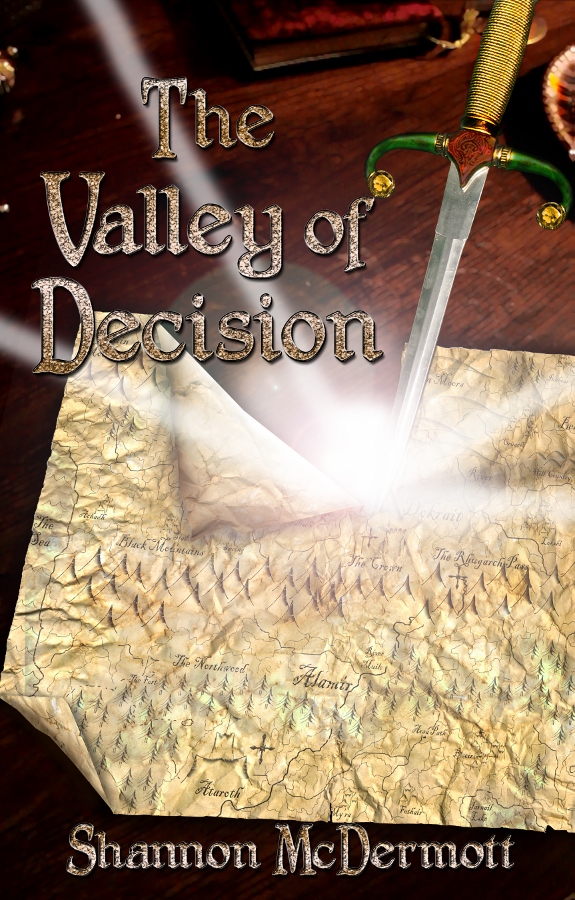 The map is actually a map of the countries in the book; if you were to get close enough, you would see the Black Mountains, with Alamir to the south and Dokrait to the north, and forests and towns marked on either side. The map was created whole, and then was bent and torn and integrated with the knife and the light. There is symbolic meaning to the torn map, but it obscures some of the details.

The original map encompasses nearly all the places of note in the story: the Rhugarch Gap, the Ushleen Moors, the Anuin mountains, Ataroth, the Northwood, the Glahs Forest, the Crown, and on. A few places mentioned in The Valley of Decision were beyond the scope of the map: the Coldlands, too far to the north; the Wildheath, south beyond Alamir; and out on the ocean, the western isles.

The map and the entire cover were created by my sister Meghan McDermott at Myristica Studios. I think the style is a bit different than much Christian fantasy, and while I won’t say it’s better, I will say I like it.

With the completion of the cover, The Valley of Decision has acquired its own Goodreads page. If it seems to you that you might be interested in reading the book someday, please add it to your “to-read” shelf.