Golden Daughter, the newest novel in Anne Elisabeth Stengl’s Tales of Goldstone Wood, has been released to Kindle. In celebration, she has put her novella Goddess Tithe on sale for 99 cents until the end of this week. (Which is, sheesh, coming up.) Purchase Goddess Tithe here, and Golden Daughter here.

Sairu vowed to protect her mistress from all harm. But when assassins and deadly phantoms set out to hunt down Lady Hariawan, can one young bodyguard protect against enemies she can neither see nor touch? With only a Faerie cat and a handsome slave to help her, Sairu’s skills and loyalty will be tested to the limit.

When a stowaway is discovered aboard the merchant ship Kulap Kanya, Munny, a cabin boy on his first voyage, knows what must be done. All stowaways are sacrificed to Risafeth, the evil goddess of the sea. But Captain Sunan vows instead to protect the stowaway . . . and a curse falls upon the ship.

In addition, I am running a giveaway of The Valley of Decision on LibraryThing until November 22. Check that out here.


The Valley of Decision 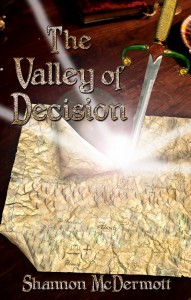 Far away, beyond the Northwood and the Black Mountains, Belenus rules the kingdom of the north.

How many centuries, how many thousands of years, he has held the north, no one knows. But when our distant fathers came over the mountains, he was there.

The Dochraitay are his servants – mortal Men, who live and die in the grasp of their undying master. They till and harvest Belenus’ fields, fight his wars, and bear children for his use.

When Belenus sends them over the mountains to destroy us, they will fear him, and we will fear them. But when the moment of choice comes in the valley of decision, hearts will be exposed.

The world will change.

What no one ever guessed will happen.