You have all heard the story of the first Thanksgiving, so there is, thankfully, no reason to go into it here. It was a great story once – maybe it still is – but we have heard it and its reiterations again and again. There is the Religious Version, blessing following tribulation and thanksgiving to God; there is the Patriotic Version, in which the founding of our national holiday entwines with the founding of America itself.

There is the Cheery Version, such as you might read in a brightly-colored children’s book, and the Downer Version, emphasizing that half of them were dead already and there were still hard winters to come. There are those who paint the Pilgrims as brave refugees of persecution, bequeathing a godly heritage, and those who paint them as incipient witch-burners and Indian-killers, and then along come the Fact-checkers to point out the Pilgrims didn’t really wear those hats, or eat pumpkin pie, and Thanksgiving began with Abraham Lincoln, you know …

… and finally you just want to eat your turkey without worrying about what the Pilgrims ate, or even why they ate it.

Even the best stories, with an expansive range of interpretations and a multiplicity of retellings, can grow stale. In fiction, what recurs are not whole stories but certain elements – the romance, the quest, the 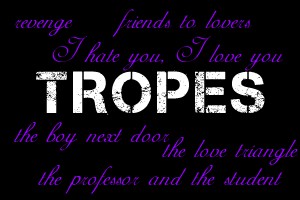 chosen hero, the mentor, rags-to-riches and David against Goliath. In a good mood, we call these tropes or archetypes; in a less generous mood, stereotypes or cliches.

Although I know how sheer repetition can wear a thing down to banality and even irritation, I tend to be sympathetic toward books accused of cliched plots or overdone tropes. When the critics say, with worldly ennui, “It’s been done before,” I think: Of course it’s been done before. Everything’s been done before. All the original stories were discovered by Adam and Eve, and the rest of us just experiment with variations on a theme.

In the matter of tropes, readers must again mark the line between “a bad book” and “a book I dislike.” Most tropes – even most cliches – are perfectly decent in themselves. A portal into another world is a wonderful idea; if I’m tired of it, that probably says more about me than about the trope. I’ve complained about the predictability of romance novels (Are they going to fall in love even though they seem to hate each other? Yes, they are! And now they have problems? Didn’t see that one coming). But humanity must tell love stories, and the characters will fall in love and they will have problems, and I have no quarrel with the genre. I just pass by.

The ridiculed tropes of speculative fiction, such as the world-saving quest and the chosen hero, have – even as romance does – deep roots in the real experiences and even realer dreams of humanity. Tropes do as a rule. Often, tropes are not enjoyed, whether because the reader has lost (or never acquired) the taste for it or because the writer has forgotten that even when it is the same theme, it should still be a different variation. But the mere presence of a trope is rarely to be criticized.