On the chance that anyone is not finding current events sufficiently bizarre, the Pentagon released UFO videos. Some people concluded from the imagery that aliens have already surreptitiously visited Earth and are probably planning an invasion that will end life as we know it. Pessimists, though, suggested that the so-called UFOs are really just afterimages. One thing is clear: What we are, as society, going to do 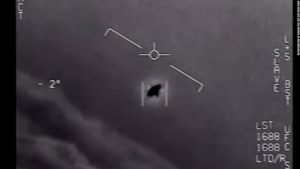 with this revelation is first of all create memes, and second talk about aliens. I’m not much skilled with the former, so let’s go on to the latter.

Some people consider aliens probable based on the science. (Others consider aliens certain based on the math, but I suspect their equations are missing some variables.) The perception of aliens as a scientific idea is widespread; the genesis of that perception is less clear. It’s not as if the existence of aliens can be deduced from observable phenomena, or proven from it. You can’t say, An apple falls from a tree and hits a man on the head, so aliens are real, or The Sun deflects light, therefore aliens live in Andromeda. And although some people swear that aliens explain unidentified flying objects, crop circles, and the pyramids, there is no phenomenon for which aliens are a necessary or even likely explanation.

Astronomy provides a different sort of rationale for the existence of aliens. The staggering number of stars and planets suggests a calculation, whether mathematical or gambler’s odds: With so many galaxies, so many solar systems, so many planets, there must be aliens somewhere out there. There is some emotion in this. The only thing more appalling than vast, unfathomable spaces is vast, unfathomable emptiness. We can’t imagine that all those galaxies are empty. And by empty, we mean empty of beings like us.

The argument is not all emotion. It has some math. But I don’t believe that anyone has written out the equations, or even can. What is the real chance of intelligent life, and how much is it increased by the sheer size of the universe? Consider that one of the patterns of scientific discovery is the great complexity of life and the specificity of the conditions necessary to it. The fine-tuning required for life is so great that some scientists posit it as evidence for the multiverse. The discoveries of astronomy gave some grounding to the idea of aliens. They did not establish it scientifically.

To trace the idea of aliens to its first proposition is not possible. Yet I doubt that it was from science, or even scientists. For all the trimmings of steel and stars, aliens have always struck me as the stepchildren of a million folk tales and fairy stories. On the surface they may be different from the extravagant denizens and ragged strays of Faerie, but in their essence, they’re the same. The world used to be huge, with unclimbed mountains and forests older than civilization and oceans that, for all anyone could dream, might pour out onto the stars. But the world grew small. We learned – we proved it to ourselves – that the mountains and forests and oceans are empty, empty of beings like us.

But our horizons expanded with science, and our dreams wandered. Maybe they were somewhere else – the moon, the center of the earth, Venus, Mars. We ruled that out, too. Now it’s the stars – somewhere, on some planet spinning around some sun, there is life like us.

We are, I sometimes think, lonely.