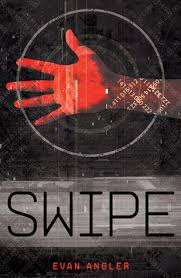 Swipe is also middle-grade fiction. This is why the age of receiving the Mark is thirteen. I thought that Evan Angler handled his cast of twelve- and thirteen-year-olds well. There were lines of dialogue I thought beyond such (I’ll say it) children, and it is always hard for me to seriously care for romance between (I’ll say it again) children. It would have been better, I thought, if the age of receiving the Mark had been put two or three years older.

Note: Swipe is the first book of the Swipe series; the third book, Storm, is the subject of this month’s CSFF blog tour.

I wrote this review before I read any of the later books. These are my first insights and reactions to the series; this is Swipe taken in context only of itself. I am planning to make my way through the series, ending in Storm later this week. To see what this tour is about in the meantime, visit my fellow tourers: