Far away, on the edge of the Dark Sea of Darkness, lies the land of Skree. 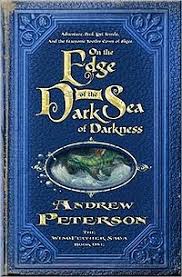 It is filled with quiet, gentle folk, which made it easy pickings for Gnag the Nameless. Now the country is infested by the Fangs of Dang. They’re stupid and lazy, but make up for it with their indefatigable brutality.

A wild forest sprawls over the land, spilling dangerous animals from its eaves. The Skreeans keep a good distance, but one man is rumored to live near the forest. Most people believe it, too. You’d have to be crazy, but he is. What else can you say about a man who wears knitted stockings on his hands, chants gibberish, and picks fights with street signs?

Despite this abundant opportunity for excitement, Janner Igiby is bored. He has spent all twelve of his years in a quiet little cottage outside a quiet little town. He yearns for adventure, for the wide world. But he should be more careful about his wishes. They’re about to come true.

On the Edge of the Dark Sea of Darkness was once toured by CSFF, and after joining I saw it mentioned. And I felt definite disinterest. “The dark sea of darkness” is bad writing. If even the title needs a content editor, I don’t have high hopes for the book.

On the first page I had a revelation. There Peterson wrote this line: “That evil was a nameless evil, an evil whose name was Gnag the Nameless.” And I realized something. The title is, of course, bad, but it is bad in the way this sentence is – on purpose, and a good one.

Humor is abundant in this novel, particularly humor of an absurd flavor. The absurdity runs deep, runs through Peterson’s whole invented world. It is displayed on store front signs – THE ONLY INN – and in the most ancient legends, which often revolve around the First People, Dwayne and Gladys. The villains make their subjects fill out forms to use garden hoes; the Chief Advisor to the High King begins his journal with the warning: “Read this without my permission and I will pound your nose.”

Yet the sea-dragons have a real and mysterious majesty, old legends are powerfully true, and the Jewels of Anniera are a matter of deathly importance – and you may take that adjective to its most literal meaning. Andrew Peterson both parodies the tried-and-true devices of fantasy and uses them seriously. In the same way, over-the-top humor coexists with danger and sadness, and comically bad writing gives way to skillful story-telling.

I would like to insert two caveats here: One, the book is YA and its main character is a twelve-year-old. This is not criticism, just something readers should know beforehand. Second – and this is criticism – the book contains instances of gross humor.

On the Edge of the Dark Sea of Darkness is a unique story – a romp through a world of pandemic quirkiness that eventually pushes past all the absurdity to adventure and beauty and tragedy. Worth the price of admission.