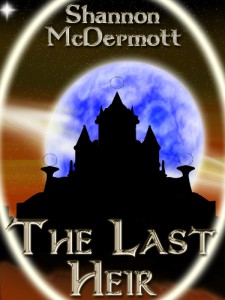 An empire among the stars, a child heir, an empty throne

“I feel about the emperorship the way a husband feels about the wife he loves.”

“I desire that high seat. Do you condemn me?”

“My loyalty is mine to give; I will give it as I see fit.”

Only time will tell how it will end.

The emperor is dead and the last heir is a child, unable to exercise the power of his throne. Left without a ruler, the Empire’s most powerful men struggle for control. Their long fight will spread from the halls of government to all the Empire, and its arena will be their own hearts and families. As the Empire divides against itself, everyone must choose who and what to be loyal to. Lines will grow hard and choices become clear, and the truth of who they are and what they fight for will be revealed.

The Last Heir is a story of intrigue, of politics and war, with moving scenes and vivid characters.

The Last Heir on Goodreads