Strictly speaking of course we know nothing about prehistoric man, for the simple reason that he was prehistoric. G. K. Chesterton

Kit keenly regretted having wandered off, but who could have foreseen being kidnapped by cavemen? The Bone House, pg. 311

This, my favorite line of The Bone House, is at the beginning of my favorite part of The Bone House. At Kit’s first sight of the cavemen, he “recognized it instantly, but knew he had never seen it in the flesh before. The face peering down at him was attached to a swarthy, rugged, square head covered with a heavy pelt of hair so thick and matted it looked like yak fur. And the features were those of a clumsily executed caricature.”

But Stephen Lawhead’s portrayal was anything but a caricature. He knocked down the stereotype of the caveman in page upon page. The cavemen of his novel were civilized in every way that matters most; their minds possessed abilities ours do not; Kit, living among them, was impressed with his inferiority and not theirs.

Interestingly, Lawhead presents his cavemen as a different species, rather than the earliest types of our own. And he makes it very clear they have souls. In the end, his treatment of the caveman reminds me of G. K. Chesterton’s commentary on the subject. Below are excerpts from The Everlasting Man, chapter I “The Man in the Cave”. 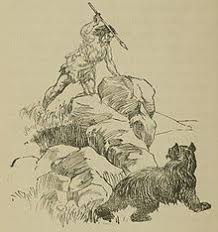 Today all our novels and newspapers will be found swarming with numberless allusions to a popular character called a CaveMan. …  So far as I can understand, his chief occupation in life was knocking his wife about, or treating women in general with what is, I believe, known in the world of the film as ‘rough stuff.’ I have never happened to come upon the evidence for this idea; and I do not know on what primitive diaries or prehistoric divorce-reports it is founded. Nor, as I have explained elsewhere, have I ever been able to see the probability of it, even considered a priori. We are always told without any explanation or authority that primitive man waved a club and knocked the woman down before he carried her off. But on every animal analogy, it would seem an almost morbid modesty and reluctance on the part of the lady, always to insist on being knocked down before consenting to be carried off. And I repeat that I can never comprehend why, when the male was so very rude, the female should have been so very refined.

The cave-man may have been a brute, but there is no reason why he should have been more brutal than the brutes. And the loves of the giraffes and the river romances of the hippopotami are effected without any of this preliminary fracas or shindy. The cave-man may have been no better than the cave-bear; but the child she-bear, so famous in hymnology, is not trained with any such bias for spinsterhood. In short these details of the domestic life of the cave puzzle me upon either the revolutionary or the static hypothesis; and in any case I should like to look into the evidence for them; but unfortunately I have never been able to find it. But the curious thing is this: that while ten thousand tongues of more or less scientific or literary gossip seemed to be talking at once about this unfortunate fellow, under the title of the cave-man, the one connection in which it is really relevant and sensible to talk about him as the cave-man has been comparatively neglected. People have used this loose term in twenty loose ways; but they have never even looked at their own term for what could really be learned from it.

In fact, people have been interested in everything about the cave-man except what he did in the cave. Now there does happen to be some real evidence of what be did in the cave. It is little enough, like all the prehistoric evidence, but it is concerned with the real cave-man and his cave and not the literary cave-man and his club. And it will be valuable to our sense of reality to consider quite simply what that real evidence is, and not to go beyond it. What was found in the cave was not the club, the horrible gory club notched with the number of women it had knocked on the head. The cave was not a Bluebeard’s Chamber filled with the skeletons of slaughtered wives; it was not filled with female skulls all arranged in rows and all cracked like eggs. …

This secret chamber of rock, when illuminated after its long night of unnumbered ages, revealed on its walls large and sprawling outlines diversified with colored earths; and when they followed the lines of them they recognized, across

that vast void of ages, the movement and the gesture of a man’s band. They were drawings or paintings of animals; and they were drawn or painted not only by a man but by an artist. Under whatever archaic limitations, they showed that love of the long sweeping or the long wavering line which any man who has ever drawn or tried to draw will recognize; and about which no artist will allow himself to be contradicted by any scientist. They showed the experimental and adventurous spirit of the artist, the spirit that does not avoid but attempts difficult things; as where the draughtsman had represented the action of the stag when be swings his head clean round and noses towards his tail, an action familiar enough in the horse. But there are many modern animal-painters who would set themselves something of a task in rendering it truly. In this and twenty other details it is clear that the artist had watched animals with a certain interest and presumably a certain pleasure. In that sense it would seem that he was not only an artist but a naturalist; the sort of naturalist who is really natural.

Now it is needless to note, except in passing, that there is nothing whatever in the atmosphere of that cave to suggest the bleak and pessimistic atmosphere of that journalistic cave of the winds, that blows and bellows about us with countless echoes concerning the CaveMan. So far as any human character can be hinted at by such traces of the past, that human character is quite human and even humane. It is certainly not the ideal of an inhuman character, like the abstraction invoked in popular science. … In other words the cave-man as commonly presented to us is simply a myth or rather a muddle; for a myth has at least an imaginative outline of truth. …

Indeed I once knew a lady who half-humorously suggested that the cave was a creche, in which the babies were put to be specially safe, and that colored animals were drawn on the walls to amuse them; very much as diagrams of

elephants and giraffes adorn a modern infant school. And though this was but a jest, it does draw attention to some of the other assumptions that we make only too readily. The pictures do not prove even that the cave-men lived in caves, any more than the discovery of a wine-cellar in Balham (long after that suburb had been destroyed by human or divine wrath) would prove that the Victorian middle classes lived entirely underground. The cave might have had a special purpose like the cellar; it might have been a religious shrine or a refuge in war or the meeting-place of a secret society or all sorts of things. But it is quite true that its artistic decoration has much more of the atmosphere of a nursery than of any of these nightmares of anarchical fury and fear.