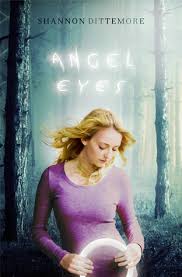 When Brielle Matthews returned to Stratus at the beginning of winter, the cold inside her was greater than the cold without. She left a tragedy behind her in the city; she did not guess its players would follow her out of it. Far less could she imagine how the world changes when you see it through angel eyes.

Angel Eyes is the debut novel of Shannon Dittemore. It’s Young Adult, and in many ways it lives up to the label: teenage leads, barely breaks 300 pages, a smattering of pop culture references, an adolescent romance.

It also lives up to its other labels. Christian. Speculative. Fantasy. This novel is far broader than its Twilight references. Stratus is a nowhere town, a shard of universality in itself. The city is apparently Portland, but it could be anywhere. The characters are too human to be pinned in their environment.

This sense of universality comes, in part, from the style. The style is, for me, the most compelling part of the book. Most of the narration is in the first-person, some is in the third, and all of it is present-tense. Shannon Dittemore matches adjectives well and freshly (the fleecy sky, for example), and she has a talent for creating pictures a reader can feel. At the book’s opening, Brielle watches a train pull away from the station: “It’s empty now, but I stare after the steel snake as the heaviness of good-bye squirms inside my chest, locked away in a cage of frozen bones and tissue. Will I ever thaw enough to say the word?”

The spiritual element is strong, with a dose of the angel-demon warfare suggested in the Bible and so vividly imagined by Frank Peretti. Yet if some of this is expected, there are new concepts, including one particularly satisfying and surprising use of angel mythology.

Brielle’s spiritual journey was well-managed. Dittemore drew her, through relationships, farther than she would have gone on her own – subtly, convincingly handled. By a Christian measurement, the novel is sound. Though some of the angelic portrayal was speculative, none of it was anti-biblical.

It did, however, bother me that the book showed so positively a believer getting into a romance with an unbeliever. I realize how unusual the circumstances were, but that almost makes it worse. There are no extenuating circumstances, no reason for a Christian to wrap his life and heart around someone who rejects his Lord as a fairytale or tyrant.

The climax had excitement and complexity, but the heroes were too haphazard. It was not only that they plunged into a crisis when a moderate amount of good judgment would have kept them out of it. They jumped into the fire with no idea what they were going to do next. They never had a plan. And they didn’t need one, because other characters forced their hands time and again.

A few things in the novel were too convenient, not really squared against the reality of the story. [Spoilers] Marco’s confession was never explained, nor did we ever learn why the police believed he had been recaptured. And the big one: After they discovered the children held captive in the warehouse, they did not call the police because Marco was with them. But that made no sense. Couldn’t Marco have just waited in the car? Or even taken the car? At least they could have given him a head start before the cops showed up.

[Spoilers continue] And even if it was inevitable that Marco be rearrested – so what? Why would Brielle and Jake put their own lives – and forty-two children – at risk to ensure that Marco didn’t end up in police custody? Logically, morally, they had no reason not to call the police.

I noticed these things, but to be honest, I did not think of them much as I read. Angel Eyes is an engaging book, with the style and the spirit to keep you in it. Shannon Dittemore has entered the Christian speculative fiction scene with talent, and as a reader, I welcome her to it.

Note: In conjunction with the CSFF Blog Tour, I received a free copy of this book from the publisher.