As usual when I have trouble alighting on a topic, I’m going to talk about myself today.

This past April I finished the raw draft of The Shameful Years, which I’ve (nearly) re-titled The Time Door. This manuscript has been different, and in some ways more difficult than what I’ve done before. I didn’t quite understand, when I began, what challenges I was setting myself with the premise. I was pleased with the manuscript when I finished it, but as every writer knows, that’s not the gold test.

The Time Door is sci-fi, and the first book of the Eternities series – of which my novella Cards is, to date, the only 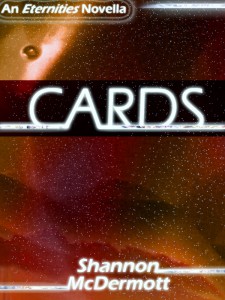 published work. I have planned Eternities as a series of free-standing novels, each book a complete story and each a significant episode in an imagined history beginning in the middle of the twenty-first century and continuing into the twenty-second.

Such a history holds innumerable stories in potential, and I hope to be mining them for years to come. But not any more this year. I decided, on completion of The Time Door, that I liked it and wanted to write something different, ideally with dragons. After exploring various ideas for a new project, I am now writing about …

A painting emperor. And his half-wild brother. And space pirates.

In this manuscript, I’m taking the characters of the Sons of Tryas series and giving them a much broader drama on a much larger stage. Since spring, I’ve been dividing my writing time between that and editing my raw draft to a polished draft.

Finally on the writing front, a young reader recently gave me this picture. He drew it after reading The Valley of Decision; I recognize the characters, the scene, the quotations. It is incredibly cool to see a moment of my book brought to life by another person. So, with appreciation for the gift that it is, I present the meeting of Keiran, Captain of the Hosts, with Kobuld the elder blacksmith of the Trow, as drawn by Christian. 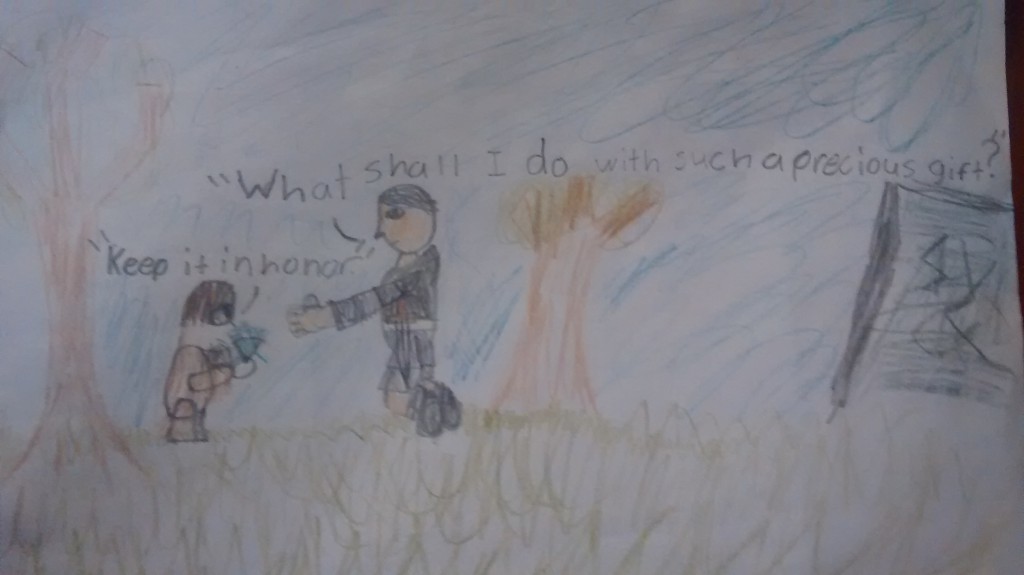