So I was thinking about what might be a good or at least passable topic and suddenly I realized: this post will go live on St. Valentine’s Day. It seemed appropriate, then, to write a post themed on this great holiday of love, and anyway 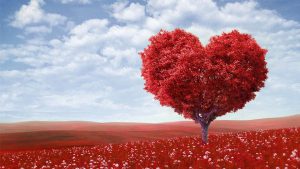 I was having trouble scraping up passable topics. Whether this post will be pro- or anti-Valentine’s Day will be up to you.

First of all, we should consider how ironic it is that the holiday of romantic love is named after a Catholic priest, a class of people who are ideally preoccupied with other concerns. Second, we should consider the intersection between romance and speculative fiction. As a fan of SF among other fans, I’ve seen a fair share of hostility directed toward the romance genre. Christian fans, at least, seem sometimes to regard it as the (regretfully ascendant) rival of Christian SF. But romance looming so large in human nature and human experience, it inevitably finds its own place in speculative fiction.

Yet a place shaped by the contours of the genre, and not always a proud one. Science fiction, in its young days, was a man’s genre, and the woman of the old stories was inevitably young and inevitably beautiful and inevitably belonged to the hero; she was also the daughter of the sage old man, and the sage old man and the strong young hero spent all kinds of time explaining things to her. In another vein, not a very deep one but at least bright, girls were tossed in along with all the other things a healthy-minded boy could desire: a quest, an adventure, a cool weapon, a fast ship, a righteous cause.

Fantasy, molded by the ancient traditions of fairy tales, has been less male-centric but not necessarily more sensible. Even moving away from the eternal puzzles of the archetypal fairy tales (could the prince really not identify Cinderella except by her shoe size?), certain ideas have thrown long shadows over the genre – true love that is instant and unmistakable, fated love that can’t be thwarted or resisted. Being rescued from a tower or a dragon or an evil wizard may seem like a clear sign, but on sober reflection, it may not be the soundest basis for a lifelong relationship.

When it comes to balanced and realistic portraitures of romantic love, speculative fiction has not, as a genre, clothed itself with glory. Neither has romance, but that is not our topic, just an aside I couldn’t resist. Over the years, science fiction and fantasy have made progress away from the old tropes and stereotypes. I’ll offer no predictions on where the genre is going. But on this Valentine’s Day, I wonder – where do you want it to go? What, in your ideal book, is the intersection between romance and speculative fiction?

So on this St. Valentine’s Day, cast a vote for or against romance in speculative fiction.