Last week I discovered that my Amazon Prime subscription includes several seasons of the original Twilight Zone. So I came to watch “Judgement Night,” an episode that opens on a civilian ship creeping across the Atlantic Ocean in the unhappy year 1942. I would be reluctant to recommend this dark little tale to many people; I would be afraid they would find it merely unpleasant. Yet it left me thinking. It is a story that demonstrates – all the more powerfully for its lack of greatness – the power of stories.

First, the story itself (and if anyone needs a spoiler alert for a sixty-year-old story – well, consider yourself alerted). We begin with a man standing at the railing, looking out at the foggy sea; he is persuaded to enter the dining cabin, 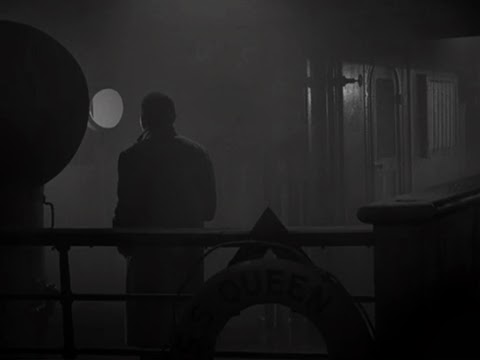 where people carry on civil conversation despite the silent, hanging dread of being stalked by German U-boats. Our protagonist is the most afraid of all, and with reason: he cannot remember getting on the ship, knows nothing but his name and birthplace and an awful sense of familiarity coupled with a crippling dread. “Judgement Night” follows the Twilight Zone pattern – tiresome elsewhere, but not here – of a bewildered person growing more and more distraught until he finally understands the trap snapping over him.

One of the awful things about this story is that the protagonist spends it just on the wrong side of understanding, where uncertain fear and sure misery converge. He’s not at all surprised when the U-boat attacks; he’s not even very surprised to see himself on the U-boat’s deck, directing the torpedoes that spill him into the ocean to drown. Neither is the audience very surprised, but the show holds its final punch until the end. We see our protagonist as the Nazi captain he always was, deriding a younger officer’s discomfort at the slaughter of men and women, but then slowly subsiding into unease as the man worries that God will damn them to a special hell – a hell where they are forced to share the fate of their victims, except that the people they killed only died once and they will have to die a hundred million times …

And we see again a man staring at the foggy sea, quiet in his confusion, and for him it is always 1942.

Probably the full strength of the story eludes us; we can’t receive it, today, as they received it then, when World War II was a living memory for most adults. “Judgement Night” aired in 1959, only seventeen years after 1942 – the same length of time between us and 9/11. To its first audience, it wasn’t just history. But if it can never be as immediate or visceral as it once was, the story still weaves its spell – the quiet, dreary atmosphere of the ship, the thick tension of fear, the frantic, useless resistance to the end. It’s chilling to see the Nazi captain again at the railing, knowing it will be exactly as it was, but there is also a grim sense of justice. God sent him to hell, but he made it.

The old-time preachers tried to evoke the horror of hell, and the rational apologists tried to justify it, and this brief story makes you feel both the horror and the justice. It’s not a great story, obvious in some ways and oppressive in others. But it possesses the power, innate to stories, to slip by arguments and intellectual proofs to make you feel truths you might not even believe. And what you feel is easy to think, for that is the power of the heart over the intellect, and of the story over the mind.