The Bible makes repeated mention of magic and witches, usually in unsparing terms. We know well the scriptural opprobrium against witches; we are in danger of forgetting the scriptural idea of witches. We all have an idea of what a witch is, but the idea is almost unavoidably an amalgam. We piece it together of a thousand stories and images. The accretion of popular myth on the Christian idea of witches is thick. Let’s consider, then, popular notions of witches and their craft and how those notions correspond with biblical ideas. 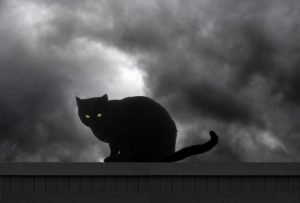 Witches fly on brooms and make wicked potions in boiling cauldrons, are associated with spiders and black cats, are often ugly and generally inclined to black clothing and pointed hats.

Yes, we’ll start with the low-hanging fruit. Yes, you already know that none of this has the barest foundation in Scripture. Simply consider that of all the symbols and imagery that collect around witches, very little of it is Christian.

These associations are biblical. The Bible sorts magic, sorcery, and divination into the same category, and witches, magicians, and mediums into the same species. Further, the Bible associates spells with witchcraft (eg. Isaiah 47) and magic with charms (eg. Ezekiel 13). Meanwhile, secret knowledge is both the means of magic – remember Pharoah’s magicians with their secret arts – and the aim of magic. Divination and the consultation of the dead especially pursue forbidden knowledge.

This is a very old and very common idea. Consider all the stories – centuries and centuries old, some of them – of female witches. Consider, too, that in the witch hunts of the late medieval and early modern West, the majority of victims were women. In the Bible, however, witchcraft is not especially associated with either sex. Infamous practitioners of witchcraft in the Bible include women like Jezebel and the Witch of Endor and men like Balaam, King Manasseh, and Simon the Sorcerer.

Witches afflict humanity with a host of seemingly “natural” maladies.

If you were to study the accusations brought during the Salem witch trials, you would see a fair example of a prevalent idea about witches: that they are the active cause of natural disasters, from human sickness to the death of livestock. There is little suggestion of this idea in Scripture. Probably the closest we come is the Egyptian magicians’ counterfeiting of the first two plagues. But these counterfeits, worked to demonstrate the power of the magicians against the power of Moses, have a very different nature than the secret, malicious attacks attributed to witches.

It is not that the scriptural conception of witches is wholly disconnected from all the other conceptions that abound through stories and cultures. There are many ideas of what a witch is. The great commonality among them is power perceived to be supernatural (itself a word of variable definition). The differences can be enough to pit them against each other in fundamental opposition. What we must learn is to discern the biblical meaning of witch from all the rest.