In the 1930s, civil war wracked Spain. Under the banner of the Republic, socialists and anarchists and Communists threw in their lot together; the Nationalists – granted force by the military and the Catholic Church – responded to the fears of the middle class. 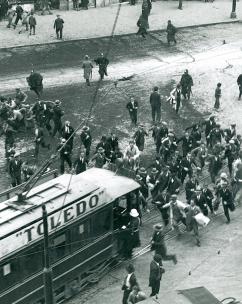 Josef Stalin supported the Republic with arms – always for a price – and controlled the Spanish Communist Party through his agents. In 1937 he reached for even greater power over the Republic, and Caballero, their chosen leader, resisted him; that was the end of Caballero. In due time the Soviets arranged a coup, overthrowing Caballero as head of the Republic and replacing him with a puppet of their own choosing. Thus enabled, the Communists – themselves under the terror of Stalin’s brutal enforcers – took over the Republic of Spain.

And then – following the script Stalin had already written for Russia – the Communists began a purge, the slaughter of their erstwhile political allies. The Republic, while still in a civil war with the Nationalists, entered into a civil war with each other. The Communists tortured and murdered their fellow Leftists by the thousands. Many foreigners were marked for murder; some managed to escape.

George Orwell was among them. After fleeing the bloodbath, he attempted to expose it in print. One editor turned him down on the grounds that it would damage Western support for the Republic.

That editor was wrong. When Orwell finally got his story printed, it affected the Republic very little. The 1930s intellectual elite were more entranced with Communism than the truth, more concerned about Stalin than about the cruelties engulfing life after life in Spain. They assured the victory of the brilliant Communist propaganda.

In a 1946 essay called “Why I write”, Orwell stated, “The Spanish war and other events in 1936-37 turned the scale and thereafter I knew where I stood. Every line of serious work that I have written since 1936 has been written, directly or indirectly, against totalitarianism and for democratic socialism, as I understand it.”

Three years later, he published 1984, modeling his hero Emanuel Goldstein after Andres Nin, a Spanish political leader murdered by the Stalinists in the Republic’s fratricide.

In Captives, Jill Williamson builds a dystopia of our own phantoms – polluted earth, Big Brother, complete social collapse, the final scrapping of all traditional morality. Today Captives begins its CSFF blog tour; I’ll be along with my review later. You can begin your exploration of this twenty-first century dystopia here:

and, of course, the blog tour: