of it all. Possibly they don’t make much. Heaven has more important business. Anyway, they have surely noticed by now that gaps in human knowledge are often filled by human imagination.

God has set limits so that, though angels are always seeing us, we can hardly ever see them. Our knowledge of angels is so slight that Christians have had a diversity of views on them. Even staying within biblical parameters, we can imagine angels many different ways. Here is a brief sampling of angelic portrayals from literature written by Christians – two from our modern era, two from the era just before.

We’re close now, so close than I can see that touching a Sabre’s wing may be the fastest way to lose an arm. I set to examining the nearest one. He’s gigantic, like Jake said. And his eyes are pure white, trademark white. Like Canaan’s. Like Helene’s. He has the celestial gaze of one who’d lay down his life for another. His skin, too, is white, so white it looks almost silver. His muscled arms and chest make Canaan look trim. But as much as I can find things to admire about his physique, it’s his wings that so separate him from any other angel I’ve seen.

Their beauty is staggering, their design inexplicable. Where I expect to see rows and rows of snowy white feathers, one blade lies on top of another – thousands of them – sharp and glistening silver. Shannon Dittemore, Broken Wings

In a graceful, fiery spiral they drifted down behind one of the college dormitories and came to rest in the cover of some overhanging willows. The moment their feet touched down, the light from their clothes and bodies began to fade and the shimmering wings gently subsided. Save for their towering stature they appeared as two ordinary men, one trim and blond, the other built like a tank, both dressed in what looked like matching tan fatigues. Golden belts had become like dark leather, their scabbards were dull copper, and the glowing, bronze bindings on their feet had become simple leather sandals. Frank Peretti, This Present Darkness

But Thou, Lord, surely knewest thine own plan
When the angelic indifferencies with no bar
Universally loved, but Thou gav’st man
The tether and pang of the particular,

Which, like a chemic drop, infinitesimal,
Plashed into pure water, changing the whole,
Embodies and embitters and turns all
Spirit’s sweet water into astringent soul

That we, though small, might quiver with Fire’s same
Substantial form as Thou – not reflect merely
Like lunar angels back to Three cold flame.
Gods are we, Thou hast said; and we pay dearly.
C. S. Lewis, “Scazons”

During the blog tour of Angel Eyes, I wrote a post considering different aspects of the angels’ portrayals and their foundation in Scripture. Now that Shannon Dittemore has continued her series, I will continue mine. The portrayal of angels may be classified one of three ways: biblical (taught in Scripture), anti-biblical (contradicted by Scripture), and speculative (neither confirmed nor denied by Scripture).

So here we go:

Angels called Sabres worship God near His throne – The Sabres bear a resemblance to the four living creatures of Revelation, whom John saw around the throne and who “never stop

But the Sabres can’t be the four living creatures. For one thing, there are twelve of them, and for another, they aren’t covered with eyes. Nor does their description match that of the seraphim. Although the Sabres have some biblical antecedent, they are speculative inventions.

Cherubs are small – Pearla, the Cherub, is a small angel; the demonic counterparts of her “cherubic order” – “impish” spies – are apparently small, too.

The Bible makes some mention of cherubs, or cherubim. They were a prominent aspect of the holy art of the tabernacle and the temple, and the Ark of the Covenant was overshadowed by golden cherubim. In the desert, when Bezalel crafted the Ark, he made the “cherubim of the Glory” of one piece with its cover. Centuries later, when Solomon built the temple, they made “the chariot” – two sculptured cherubim who spread their wings above the Ark in the Most Holy Place.

It is clear that those sculptured cherubim – whose design God had given to David – had two wings. We’ll get to the importance of that later.

Cherubim, together with the flaming sword, guarded the way to Eden and the tree of life. The four living creatures Ezekiel saw were cherubim – angels with four faces, four wings, and a multitude of eyes. “When the creatures moved,” the prophet wrote, “I heard the sound of their wings, like the roar of rushing waters, like the voice of the Almighty, like the tumult of an army.”

In chapter 28, God speaks: “You were the model of perfection, full of wisdom and perfect in beauty. You were in Eden, the garden of God; every precious stone adorned you … You were anointed as a guardian cherub, for so I ordained you. You were on the holy mount of God; you walked among the fiery stones. … Your heart became proud on account of your beauty, and you corrupted your wisdom because of your splendor.”

Pearla, the Cherub, was called “little one” by the archangel Michael. One cannot imagine Michael extending the same endearment to the cherubim guarding Eden, or the four living creatures, or the “guardian cherub” of Ezekiel’s prophecy. One word you would not associate with the cherubim of Scripture is “small”.

In making imps and cherubs small, Broken Wings is drawing from culture and art, not the Bible. Indeed, the small cherubs make a very different impression than the cherubim of Scripture. Yet given the diversity of cherubim even in Scripture – two wings, four wings, two faces, four faces, covered with eyes, covered with jewels – I am reluctant to call Pearla the Cherub anti-biblical.

God assigns to human beings Shields (guardian angels) – In Acts, after Peter’s miraculous escape from prison, he came to the house of John Mark’s mother, where the believers initially thought he was “his angel”. Christians have believed in guardian angels since the beginning of the Church.

Two verses in Scripture support the idea. In Hebrews, the author writes, “Are not all angels ministering spirits sent to serve those who will inherit salvation?” The Gospel of Matthew recounts Jesus saying, “See that you do not look down on one of these little ones. For I tell you that their angels always see the face of my Father in heaven.” This is even more in the way of guardian angels, because it implies that God does attach specific angels to specific people.

The details of “our” angels, and how they minister to us, are unknown to us. Maybe the popular idea of an angel who is always near us is correct; maybe the angels watch from heaven; maybe they come, from time to time, as God directs. The “Shields” in the Angel Eyes Trilogy are a sound biblical idea, even though the specifics are by necessity speculative. 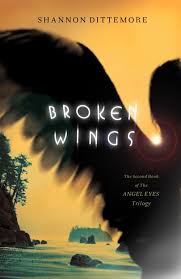