One of the purposes of this site is to explore the meeting of Christianity with culture broadly, and with art particularly, whether that meeting is synthesis, negotiation, or conflict. That exploration grows more and more relevant as our society transforms into a post-Christian culture. Still, the meeting of Christianity and art is as old as the Church Universal. It is interesting to consider how the early Christians made their own negotiations in a pre-Christian culture.

Ancient Christian art, some of it dating from the second century, is preserved in the Catacombs.1In the 1800s, when the serious scientific study of the Catacombs began, the oldest artwork was dated to the first century AD. But modern estimates place it a century later. The Catacombs, as you know, is the collective name given to a web of underground Christian cemeteries excavated around Rome when the emperors were still pagan. Christianity was, in those days, an infant religion in an old civilization. The Greeks and the Romans had brought to a high state the arts of sculpture, painting, and architecture. These arts served causes of which the Christians could not have approved: the glorification of pagan emperors and pagan gods, an endless proliferation of images and temples. Yet Christians brought those arts, as they were able, down into the Catacombs, in frescoes and paintings and sarcophagi. 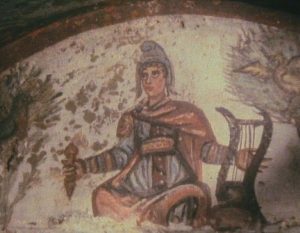 It’s not surprising. Humans must have art. Humans must especially have art in their sacred places. What is more notable is that the early Christians borrowed not only Rome’s art forms but, to a limited extent, its pagan imagery. The classic image of Orpheus taming the wild animals frequently appears in the Catacombs, doubtless as a type of Christ.2W.H. Withrow, The Catacombs of Rome (London: Hodder and Stoughton, 1888), 266. Other pagan representations include Ulysses and Mercury, curiously placed in the scene of Elijah’s ascension into heaven.3Withrow, 267-68. In the Early Church, Ulysses was taken as an allegory for the soul’s journey home. There is no allegorical explanation for Mercury. There is some evidence, however, of pagan images being hidden or destroyed, indicating that not all Christians of that early time were sanguine about this artistic syncretism.4Ibid.

Symbols were very common in the Catacombs, etched onto countless graves. Some, such as the fish or the Christogram, were exclusively Christian in their significance. Others, like the ship, the crown, and the palm branch, were shared with the dominant pagan culture of Rome. As Withrow comments in his book, however, the common pagan symbols of serpent and dog are largely rejected, with the former appearing only in depictions of Eve’s temptation and the latter used only as an accessory in hunting scenes.5Withrow, 298. Dogs were symbolic of fidelity in Roman culture. It is easy to understand why the serpent was rejected, and perhaps Withrow is right in his speculation that early Christians shared the Jewish conception of dogs as unclean. Whatever the reason, the pertinent fact is that Christian art did not include all Roman motifs.

The symbols of the Catacombs encapsulate the early Christian use of the art that, created by pagans, surrounded them. They added much that was new, and infused much that 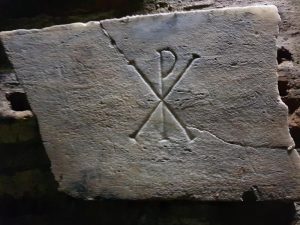 was old with new meaning (the laurel wreath did not mean quite the same thing to Roman pagans as it did to Roman Christians). They retained cultural symbols and even nakedly pagan imagery. And some elements of pagan art they excised entirely. (Withrow also notices the far greater modesty of human figures portrayed in the Christian Catacombs than in pagan art.6Withrow, 264.)

Art is not Christian. Art is not pagan. Art is human. Like all things human, Christianity puts it in negotiation with the divine to find its expression and meaning. As illuminated in the Catacombs, Christians have from the beginning attempted the synthesis of faith with culture: the addition, the retention, the rejection.

And if the defaced pagan images are any clue, we have always been disagreeing about it, too.