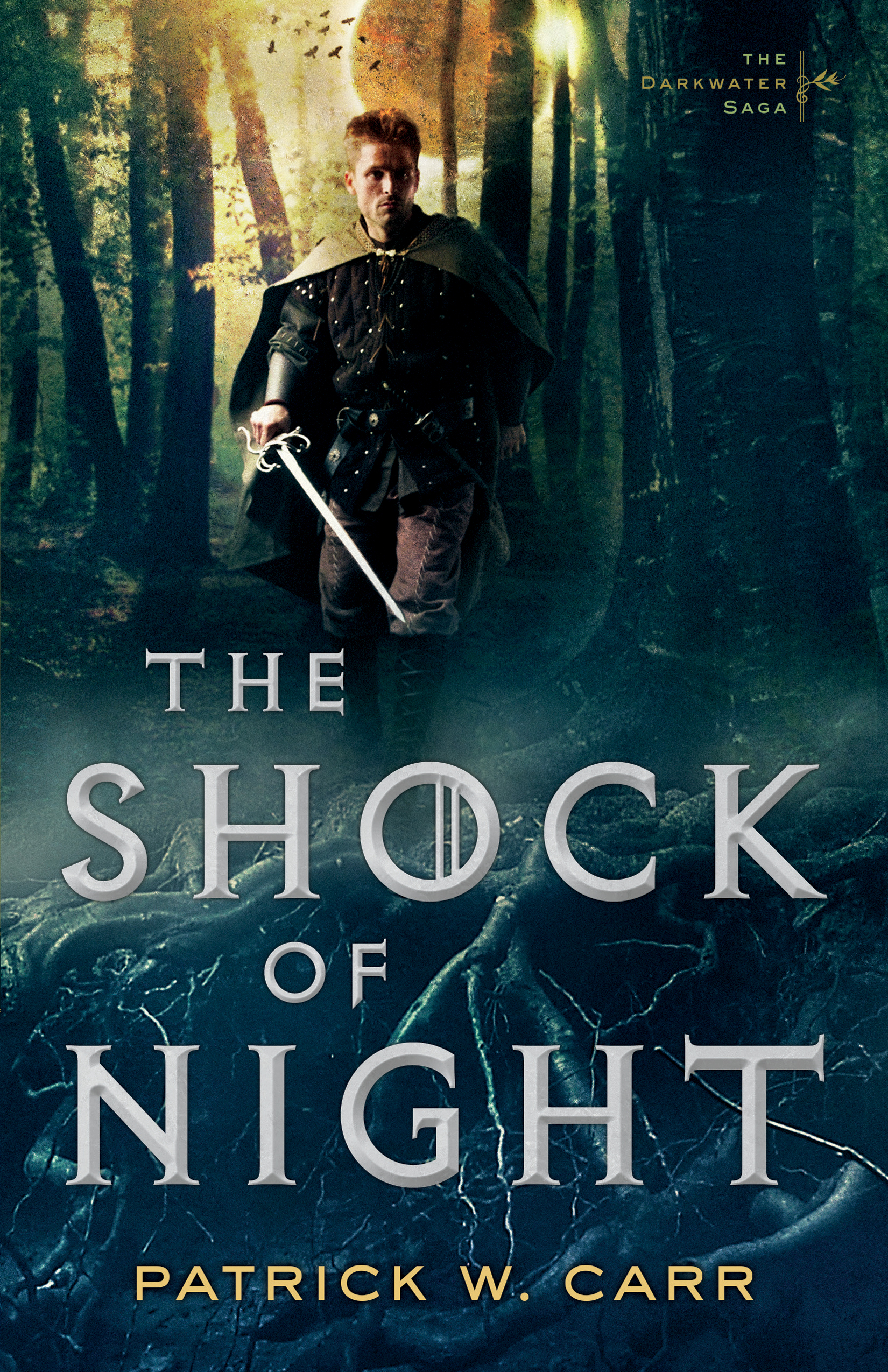 Willet Dura has survived a great deal – war, years of pursuing criminals, and (most impressively) the Darkwater Forest. It all helps to explain his uncanny interest in death, but it doesn’t quite excuse it. As the king’s reeve, he is called to investigate murders in the royal city of Bunard; sometimes he arrives at the scene of the murder before he is called. And there he does the one thing no other reeve in the city does, or has ever done: He questions the dead victim. What do you see?

Happily, there is never any answer.

The Shock of Night, written by Patrick W. Carr, is the first book of the Darkwater Saga. The novel is fantasy, and its world-building is particularly elaborate. From the treacherous world of the nobility, with all its grand constructions; to the ancient church, divided into four orders and weighted with history and tradition; to the almost superhuman “gifts” that divide mankind into classes, to the poor quarter and the urchins and the royal city itself – this is an unusually intricate world, and it’s not mere scenery. These are not only elements of the world but of the story itself.

That is to Patrick Carr’s credit, but it necessitates a slower pace and a more elaborate style than is normal in modern novels. In another aspect, however, the novel’s style is very modern: It switches off between a first-person and a third-person viewpoint, with the first-person narrator sometimes appearing in the third-person sections. I have known other modern authors to do this, and I have always regarded it as a kind of cheating – an unsportmanslike attempt to dodge the limitations all narrative styles necessarily bring. The stark combination of two different styles breaks the unity of the narrative and can create dissonance for the reader, though many readers doubtless rise above.

This novel boasts a large cast of characters, realistic and handled with a human icord.org/ambien/ touch. Willet Dura, the protagonist, is intriguing from the start, a genuine hero with an indefinable dark side. There is something wrong with him, but we aren’t sure what. And neither is he. Toward the end he began to verge on the unlikeable, as he passed judgment where he had no right to and condemned people without realizing they were much like himself.

Having read Carr’s previous trilogy, I can see in his newest book his continuing maturation as a writer. I regard The Shock of Night as his finest novel yet, holding onto the strengths of his earlier books and allaying the weaknesses. I did not, of course, find the novel perfect. I thought the characters showed a remarkable lack of zeal in questioning their one eyewitness to a murder they were so eager to solve.

Worse, it puzzled and eventually annoyed me to watch one character shift his loyalty from the Vigil to Dura. Admittedly, the Vigil did some things that were … difficult. But that is from the reader’s viewpoint. From the character’s viewpoint, he had watched the Vigil do such things for many years, and served them faithfully through it, and evidently approved, or at least accepted, all of it. I saw no reason why he should have suddenly taken offense, especially for Dura’s sake. I enjoyed Dura as a character in a book. But as an individual in the real world, I would not let him loose on the streets.

The fantasy concepts of The Shock of Night – the Darkwater, the Vigil, the gifts, mental “scrolls” – are fascinating and well-handled. The world of the story is complex and convincing, and the style of the book matches it. The Shock of Night is a worthy fantasy novel, and I am glad to see Patrick Carr back on the scene.