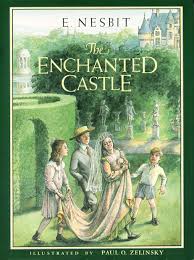 A biographer of C.S. Lewis once called a collection of preparatory schools a testimony to the fact that English parents do not enjoy the company of their children. However that is, the old system did separate parents from children; such separation is generally, in children’s fantasy books, a precursor to magic.

In The Enchanted Castle, Jerry, Jimmy, and Kathy were stranded for the summer at a boarding school. A free romp in the woods led to the discovery of a cave, which led to the discovery of, well, an enchanted castle. A princess ushered them in and showed them a magic ring, though one was realer than the other.

The cast of the novel is limited, and all the stars are children. Indeed, the density of the adults at times strained credulity. A skeptic is a skeptic, and sometimes people have trouble believing their own eyes. Yet if you keep on showing wonders to various people, eventually someone must inquire further; otherwise, it’s only literary convenience.

The book gets no closer to religion than statutes of Hermes and Psyche. It is, simply but completely, clean, and the author goes to lengths to emphasize the need for truth-telling, although not to temporarily alive Ugly-Wuglies.

I will say now that there is nothing childish about this insistence on goodness. Yet more distinctly adult is the notion of the price of fulfilled wishes. Nesbit also evokes with surprising effectiveness the ghastly, independent animation of the Ugly-Wuglies, and the children’s horror and fear of it. Existential doubt, though hardly in, is still in.

The Enchanted Castle is a story mainly of adventure and humor, but other things are mixed in – a little romance, a little horror, love and loss. The magic borders into wonder, and the book has the sort of ending that pays you back for every moment you spent on it. The Enchanted Castle is technically a children’s book, and it’s fit for children; it’s also fit for adults.