The Greatest Showman (now in theaters!) opens with an exuberant musical number titled – this follows logically – “The Greatest Show”. It’s on YouTube, of course, though merely listening pales against viewing it and, even more, viewing it in theaters. Part of the brilliance of this song is that it captures what made the greatest show and it was, above anything else, the greatest showman.

And what made the greatest showman? The song spins out an answer to that, too: his peerless ability to draw his 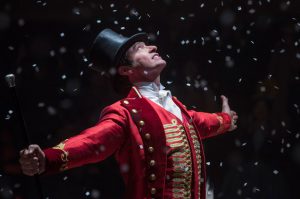 audience into a world of his own construction. Call it persuasion or illusion, call it seduction or a con, but it is what he does. The song is an invitation and a promise. Here, beneath the colored lights, is the answer to the ache in your bones and the end of your search in the dark; this is what you’ve been waiting for. This is where you want to be, the greatest showman tells you, and this is what you want to have. “Tell me,” he asks, “do you want to go?”

Do you want to go? This is the question P.T. Barnum put to the crowds that flocked to his circus. The greatest showman was not without a touch of the conman, and he knew the great secret of the con: The “mark” participates in his own deception. A true conman doesn’t outwit his victims; he sells them what they want, and their own desires override their judgment. A true showman is also in the business of selling people what they want, and if they forget it isn’t real, it’s only because they want to. Barnum never had any pretension of hoodwinking people who didn’t take it as a pleasure.

Do you want to go? This is the question Hugh Jackman puts to anyone who ventures to his film. No one with a fine sense of balance, to say nothing of humor, could make a movie about P.T. Barnum and not mix in a dose of malarkey. The Greatest Showman lives by this. Happily anachronistic, luxuriating in the idea of 1800s New York without any undue attachment to the facts, making its nineteenth-century subjects reflect a little too clearly the values of its twenty-first century audience – it cannot be the way it was. But you’re willing to forget that for the spectacle and the joy and the thoughtful examination of a dreamer and his dreams.

Do you want to go? This is the question that every book and show and movie asks. A great deal has been said and written about how that movie strains human credulity or this book breaks the facts clean in half. Dramatic courtroom revelations aren’t really a thing, a punch to the face is enough to end any fight, love at first sight could get you into a car with a serial killer, it’s ridiculous that anyone – even with superpowers – would choose to save the world wearing a cape but no pants. There are more solemn warnings of more pernicious falsehoods, reminders that we can’t really believe in the heroes and the happy endings, the perfect love stories and the last-minute rescues.

Yet I wonder – how often are we really fooled? Are these constructed worlds really so persuasive? But we want to go.