When a lord’s city is filled with secrets he can sense but not see; when the enemies he once beat seem determined to win again, and when they are strangely adept at disappearing, and strangely adept at reappearing; when frauds come with lying blessings and lying relics, and win the hearts of a lord’s subjects – when all this happens, what is a lord to do?

In Martyr’s Fire, Brouwer maintains the historical mien of the earlier books, along with the carefully woven web of hidden truths, conspiracies, and mistrust. Certain things are different in this outing. In some ways the scope of the novel is wider here – Brouwer took his readers to a more diverse array of settings, and made greater use of England’s legends.

In other ways, though, the scope of the book is more limited. Few new characters were introduced, and none of them became principal characters. While the plots of the earlier books revolved around taking a city and going to war, Martyr’s Fire has more the air of a personal quest, a few people on an adventure.

And I enjoyed it. Of all three books in the series, I like this third one most; to be honest, I liked it more than I expected to based on the first books. Not that The Orphan King and Fortress of Mist were bad, but somehow I reached a new level of enjoyment with Martyr’s Fire. I even enjoyed the writing style more.

Two other things I appreciated about this book: I appreciated the heroine, full of intelligence and spark, and every inch the hero’s equal; and I appreciated that though Brouwer portrays the darkness that existed in the Catholic Church, he does provide glimmers of the light.

As a whole, this series has a low level of violence, for which I salute the author. Too many writers fall prey to the idea that nothing is exciting until somebody dies.

Martyr’s Fire is an interesting novel, with a wealth of intriguing historical details and a clever fusing of mythic elements into the actual world. The cast of characters is also interesting, and occasionally fun. Recommended – Martyr’s Fire, and Merlin’s Immortals.

Thomas has the city of Magnus, and other things his enemies want even more. He is not entirely sure who his enemies are, much less where they are, but they keep leaving him signs. The slaughtered bulls were a pretty clear hint.

He has other hints – hints of help from the people who would be his friends, if they weren’t so suspicious. Caught between a conspiracy and a secret, Thomas is left to grope for answers. The war provides some distraction, though.

In Fortress of Mist Sigmund Brouwer continues the story of the Druids, the Immortals, and Thomas. With the setting-up accomplished, the plot is brisker and more enjoyable. Two of my favorite characters melted into the background. Thomas was, I think, worse as a character for the knight’s disappearance. The dynamic they had developed in the first book – the knight committed to helping Thomas, yet testing and teaching him – was good for him and good for the story.

In stories generally, and in fantasy even more so, male characters tend to outnumber female ones. Merlin’s Immortals is no exception. Yet the female presence seems unusually strong to me. Of both the Druids and the Immortals, it is a woman who is most active and most interesting in the story. Thomas’ teacher, who put him on his quest, was also a woman.

As far as I have seen, there is no real magic in the series. The “potions” and supposed sorcery are only natural tricks made to appear supernatural. The books affirm, however, that the Druids practice human sacrifice, and it is almost impossible to combine that with a studious rejection of genuine witchcraft. I think it is true, as G. K. Chesterton wrote, that pagans practiced such demonic rites not because they were ignorant of how terrible they were, but because they knew. The potent horror of blood and fire was meant to evoke the horrible power of dark forces. It is hard to imagine people who would sacrifice to demons but seek power only from scientists.

I don’t mean this as criticism of the book. The scientific magic is the freshest and most ingenuous element of the series, and we don’t know much of the Druids yet. But come the next book, it will be time to. The hints, along with the game of distrust, have about run their course.

Fortress of Mist is a better book than The Orphan King; I expect the third book will be better yet. Few mysteries have actually been solved, and you know, closing the book, that the characters have a long, and very interesting, way to go yet. 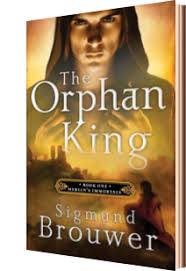