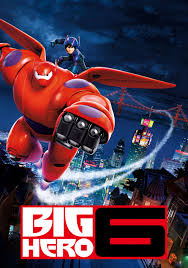 If you really want to get the bad guy, it’s logical to conclude you need a hero. You might further conclude, especially if you’re fourteen, that you need a superhero.

But to go from there to creating a superhero? For that, you need adolescent logic combined with genius-level skill. So enter, stage-right, Hiro Hamada, the protagonist of Disney’s just-released Big Hero 6.

From the very beginning, Big Hero 6 exhibits its blended nature. It’s a superhero film, yes, but beneath the flash and action is an essentially sci-fi framework. The city of San Fransokyo – a delicious mesh of Tokyo and San Francisco – and elements such as bot-fighting create a world that is near to ours and yet misses it entirely. This may be the future, and it may be an alternate universe, but either way, it’s sci-fi. The story brings even “harder” sci-fi concepts into play, anchoring deeper into science fiction and eventually leading to one of the film’s most imaginatively beautiful moments.

The characters are likable (especially Tadashi) and often quirky (especially Wasabi and, uh, Fred). As in Frozen, a sibling relationship is the linchpin of the story. But here the relationship is less complex and far more positive. It’s also brother/brother, which I mention to bring up something I’ve long wondered about: Why, on those unusual occasions when sibling relationships really are important in a story, are they almost always brother/brother, or sister/sister, and not sister/brother?

There’s a dose of tragedy in Big Hero 6 – nothing new in that, even for a so-called “family movie”, but the movie digs

deeper and darker than normal. It deals strongly, though with a light hand, in themes of revenge. The movie also raises the old comfort that “He lives on in our hearts” – a standard consolation when people want to provide some assurance of continuing life but don’t want to bring up heaven. But Big Hero 6 breaks form to portray dissatisfaction with the comfort: “He’s gone” – a simple counterpoint, simply expressed, but true and right at the heart of the matter.

Not that the movie seeks comfort in heaven, or that dissatisfaction is disbelief. All truths can seem like platitudes in the face of death, and to believe is not always to be comforted. But it was a sad moment and an honest one, and it felt almost subversive.

More than anything else, Big Hero 6 is a movie of enormous creativity. From the futuristic (or AU) world of San Fransokyo to a glimpse of what I can only imagine to be some sort of fourth dimension; from the robots and other tech to the incredible CGI that brought them to full glory – the cleverness of this movie is wonderful.

And so, for that matter, is its heart. As Big Hero 6 follows Tangled and Frozen, I think we’re on the wave of the third Disney Renaissance.

All children grow up, except one. And Peter Pan, eternally young in Never Land, has another sort of immortality in the real world. Everyone knows who Peter Pan is.

Of all the re-tellings of Peter Pan over the years, Disney’s 1953 film may well be the most famous. A skilled artistry underlies the whole movie. The animation shows an expert hand. The writers wove together a complete story, with a villain and resolution and change, and sprinkled it generously with humor. The composers contributed a few lively songs, as well as the classic “Second Star to the Right” and the tender “Your Mother and Mine”.

While the Darling family is sympathetic and more or less normal, the denizens of Never Land have a strange tendency to seesaw in their natures. Captain Hook is sometimes a villain of brute and even senseless force, sometimes a villain of considerable cunning. At some points in the movie he’s a dapper sophisticate, and more often he’s a victim of comic mischance and the sort of slapstick only an animated movie could pull off. (I recently watched the movie with a small child, and apparently the slapstick sequences are hilarious.)

Tinker Bell spends the first half of the story in a fit of such burning jealousy that she actually tries to engineer Wendy’s death. But if she, among all the protagonists of the story, commits the most ignoble act, she also commits the most noble one. Her self-sacrificial rescue of Peter Pan grows into the only tender scene that revolves around Peter.

Which leads me to Peter Pan, the title character who is so much at the center of the action and so much on the edges of the film’s emotion. He whisks Wendy and her brothers to Never Land, and he sets off Captain Hook’s aggravated quest to get him. Though he readily engages Hook, all the life-and-death passion is on the captain’s side; Peter Pan plays the game with zest, but no gravity. And though he brings Wendy to Never Land to be his mother and the Lost Boys’ mother, he begins to forget about her shortly after they arrive. First the mermaids, then Tiger Lily draw his attention away.

In addition to this forgetfulness, Peter Pan showed a streak of mean-spiritedness – laughing as the mermaids ganged up on Wendy, humiliating Hook after defeating him.

Yet there is the scene of Tinker Bell’s rescue, which takes Peter Pan out of himself and his own self-enjoyment. And there is a poignant moment where he – listening alone to Wendy’s song about mothers – snaps his arrow in half.

Walt Disney was dissatisfied with Peter Pan when his company finally finished it, finding Peter Pan cold and unlikable. But there’s no greater tribute to Disney’s success than calling Peter Pan one of his failures. It’s a fun movie, an adventure filled with memorable and sometimes charming characters. Even Captain Hook is entertaining; even Peter Pan is fascinating.