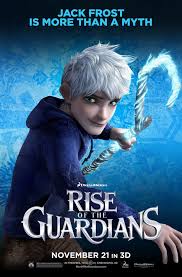 st was nimble, Jack Frost was quick; Jack Frost froze the world with his stick.

Yes, I know: It’s a mixing of disparate bits of culture and childhood lore, kind of catchy and not quite right. And in that, it’s like Rise of the Guardians.

Rise of the Guardians was released into theaters around Thanksgiving, and released onto DVD just before Easter. It is, indeed, another holiday movie, and like so many holiday movies, Santa is a character. But this is a Russian Santa. With Yetis. And the movie is not really about him anyway.

It’s about Jack Frost. Free, irresponsible, spreading fun, spreading mischief, leaving messes in his wake, always unseen; nobody believes in Jack Frost. The Guardians know he exists, but they don’t really know who he is. To be fair, he has only a poor idea himself.

I must say this about the movie: It was nice to experience a story about Jack Frost. I had never before seen Jack Frost slated any role, let alone that of hero. To me the idea was fresh, and they made him a character both charming and touching. His style is in vogue: cool, ironic, an edge of bitterness. But from the beginning there’s a palpable yearning, and a certain warmth toward the children he leads on wild snow days. Backstory often fails to live up to its own foreshadowing, but Jack’s doesn’t. It is pitch-perfect, full of emotion without angst, and it truly makes sense of what Jack is and why.

Rise of the Guardians has two great strengths. The first is their ability to unite different pieces of childhood stories and so cast a new light on all of them. To create a story with Santa Claus, the Easter bunny, the tooth fairy, and the boogeyman is to create a world large enough to contain them.

The second strength is the personalities of the Guardians and their delinquents, Pitch-Black and Jack Frost. Pitch is, essentially, an inversion of the Guardians – an interesting and softly menacing character. (A lot of the credit for this goes to the actor, who played him like velvet – soft and black.) The Guardians, though all abundantly well-meaning, are a little … wonky, somewhere between offbeat and mildly neurotic.

Despite all that it does right, Rise of the Guardians is hobbled by a sense of not being quite big enough. This comes partially from the oddly limited way in which the Guardians responded to the boogeyman. They showed no degree of strategy and – energetically but, on consideration, unjustifiably – ran around plugging up leaks where they should have been thinking how to dam the river.

The story’s conception of the Guardians, like its use of them, was sometimes limited, and this also fostered a hazy sense of smallness. Most of what the makers did with the Easter Bunny and Santa 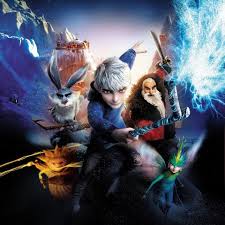 Claus and so forth was fun, and the way they brought these childhood legends together was coherent and interesting. But it wasn’t grand. The story had one piece of really excellent mythos; what it did with the Man on the Moon was mythical, worthy of a fairytale. The makers, however, failed to expand this piece of mythos. The movie as a whole would have been elevated if some of the generic “belief” had been replaced with the mystery and purpose of the Man on the Moon.