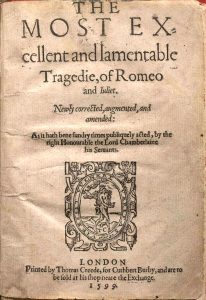 Shakespeare is the greatest writer in the English language. I know because everyone says so. Like most of you, I was compelled to experience his greatness in school, and I did not particularly enjoy it. (It was Othello. I could not work out the math by which the Great Handkerchief Scandal resulted in murder.) Earlier this year, I decided to give Shakespeare another go. I browsed Amazon for options and, scrupulously applying my principles, chose the most cost-efficient: the complete works of Shakespeare, bound into one enormous volume that could probably be used as a murder weapon but cost, used, $10.

The table of contents covers well over two thousand pages. I searched it for a place to begin and, intimidated, settled on the beginning. I proceeded on this direct approach only to be confronted by Romeo and Juliet. All my adult life, I had 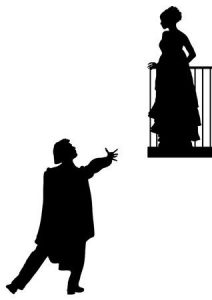 intended to never read Romeo and Juliet. But it was the next story in the collection and so, for a sense of completeness, I read it. The play has four centuries of hype to live up to and, as you would expect, it doesn’t.

It has its points, of course. My experience of Shakespeare is limited – Romeo and Juliet is only fourth in the book – but he seems to have been the kind of writer whose work is often uneven but never meritless. There is wit and gorgeous verse in Romeo and Juliet. The dramatic irony is interesting. The graveyard denouement, and Juliet’s living burial with her dead relatives, are evocatively horrible. And although Shakespeare probably didn’t intend it, it is kind of funny to watch Romeo drama-queen all over the stage.

And yet, as a love story, Romeo and Juliet is hasty and shallow. The two meet at a party and marry the next day. By the time they commit suicide, they have known each other perhaps a week. Granted, it was a jam-packed week, mostly with murders, but still. I know they were passionate to the point of hysteria. I know they gave some pretty speeches. I hold, nonetheless, to the principle that one of the requirements of a grand love affair is that it outlive milk.

If not a grand love story, Romeo and Juliet is a great tragedy – needless and self-inflicted, unredeemed by nobility. Neither hero nor heroine was courageous when it might have helped. Both, once they discovered each other, became cruel to everyone else – whether it was Juliet declaring her cousin’s death a good thing or Romeo skewering poor Paris. When the apothecary protested that he could be executed for selling the poison, Romeo goaded him into it by scorning his hunger and poverty. He put the man’s life at risk and pressed him into the guilt of complicity with another’s self-destruction. These are great moral crimes.

Mostly, Romeo and Juliet distinguish themselves by their absolute lack of wisdom and good sense. They were not star-crossed lovers. They were simply and inexcusably wrong about everything. Their secret marriage was a disaster in the wings from I do. That was so exceedingly obvious even they should have seen it. The only question was whether the crisis would be forced when Juliet got pregnant or when her parents chose a husband for her. Romeo and Juliet might have at least tried the honest approach. Rejecting that, they might have run away together. Either brave frankness or open rebellion could have saved them. But they would literally have rather killed themselves.

The only sensible reaction to Romeo and Juliet is Children, you are really very stupid. And that is the crux of this tragedy – that they were little more than children in need of adult supervision, and nobody was it: not the Nurse, not Friar Lawrence, not their awful parents. Romeo and Juliet got drunk on their first sip of sexual love and ruined everything. That is not a beautiful love story, nor an ennobling tragedy, but it is piercingly poignant.