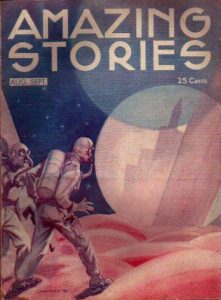 Recently I developed a literary theory on short fiction. This wasn’t intentional. It was a result, rather, of my attempts to

escape boredom without having to pay any money.

I do aerobics. Aerobics have been described, not entirely unjustly, as “the ability to withstand enormous amounts of boredom”. I have tried to alleviate the boredom with music, podcasts, interviews, and – what proved best of all – audiobooks. Because I don’t enjoy audiobooks enough to actually pay for them, I use LibriVox, a resource of free audiobooks.

Free, because all the books are out of copyright.

Out of copyright, thus old.

Old, and so often short.

Short fiction was more popular in the old days, before the Age of the Trilogy. It’s an odd paradox that the literary fashion of our time, which demands Instant Hook (“You Had Me At Hello”), can hardly ever let a story end without first prolonging it through several books. On the one hand, the Hook Establishment, ever telling aspiring authors their first paragraph isn’t exciting enough. On the other hand, the ubiquitous series.

Literature of the old school wasn’t like this. It used to be that nobody expected anything truly exciting to happen on the first page, or even in the first chapter. If an author took a hundred pages to set up a story, readers would understand. And yet the days of the long, slow openings were also the time of the short story. A wealth of short stories surround literary monoliths like Moby Dick and War and Peace.

On LibriVox, I’ve found short fiction published in the late nineteenth and early twentieth centuries: novellas by George MacDonald, a couple short story collections by E. Nesbit, a handful of sci-fi novellas and anthologies. The sci-fi anthologies especially helped me to see that the heart of a short story is not the characters, or the plot, but a single, pulsing idea.

As I listened to these brief sci-fi stories, I came to see them as expressions of ideas, answers to questions that, never spoken, could eventually be seen: What if Martians invaded Earth disguised as performers in a parade? What if aliens intervened to stop nuclear testing? What if it really were possible to bring bad luck? Could orbiting Earth change a man’s perspective in more ways than one?

Novels are also about ideas, small and large. But the virtue of short stories is that they permit the expression of ideas without the lengthy, elaborate weaving of novels – a sketch to a tapestry. Some ideas would not be given literary life otherwise – because the author lacks the time or interest, or simply because the idea itself cannot carry a long story.

Let me give you an example. Suppose I wanted to write about the Guild of Avenging English Students, a secret organization whose mission is to capture the Hook Establishment and send it through time portals in order to suppress various interminable classics. The ultimate goal would be that no one ever again had to write a paper on Moby Dick, and of course there would be all sorts of dangers, such as the Hook Establishment getting schooled by Tolstoy.

Is this idea worthy of a novel? No. Could it be woven with other ideas to make a novel? Probably not.

But it would be a lark, and in a short story the idea could reach, without exhausting, its potential. That is the beauty of the short story.