Just on the side of the road, as you enter the little town in the mountains, there is a sign: Beckon: You’re

here for a reason. And I can see why they chose that. It certainly beats out: Beckon: There is something seriously wrong with these people.

It’s a pity, you know, that the sign doesn’t say that. It would have been fair play. All the same, it never took too long for visitors to figure out that there was something wrong with those people. And still it was usually too late.

And this leads to the novel’s greatest merits. The premise of the book is one of the most intriguing and innovative I have ever read. It kept me engaged to the very end. Tom Pawlik draws readers deeper in with skill – never too much revelation at a time, never too little.

The book is divided into four parts. The first three are devoted, in turn, to Jack, Elina, and George, detailing each one’s path into Beckon and its mysteries. At the fourth part, their storylines merge. This was Pawlik’s way of pulling up the curtain, as each character stumbled onto a different secret hidden within Beckon.

Pawlik also used it to concentrate attention on his heroes, to give a sense not only of where they had arrived but where they had come from. So the story, with all its revelations and dangers springing at them, doesn’t just happen to them. It seems instead to be part of a journey they were already on.

I have two complaints against this book. One, the violence level was too high, and some instances were, frankly, disgusting. The casualty rate of the cast was astounding. I got the feeling sometimes that the author killed characters simply because he didn’t want them in the next chapter. When he was through with them, they were through.

My second complaint – perhaps related to the first – is that the book does not fully explore the mysteries it presents. The N’watu and Beckon are both, in their way, fascinating, but their depths are left unmined. What their lives made them, what it all meant to them, is never really told.

I still don’t know what made the N’watu tick. Yes, they hated and feared outsiders – but why? You cannot be afraid without feeling that you are vulnerable. What vulnerability did they see in themselves? I would ask what vulnerability they saw in their god, but I am not sure that they had one. It was never clear to whom, in their own understanding, they made their sacrifices.

I can’t say that I will pick up Beckon again, but I expect it to be popular. Its premise was genuinely compelling, and it excelled in suspense and mystery. Those who enjoy thrills and chills will probably enjoy this.

We have an unusual number of links this tour, so here we go:

And now, the blog tour: 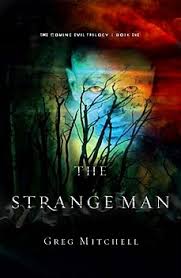 Dras has problems. He has no job, no money, no prospects, and no ambition. Plus, he just got gypped on a Snake Eyes GI Joe action figure.

But the Strange Man is coming to town, and soon Dras will really have problems. When the bogeyman sets his sights on you and your best friend, it’s time to run. Or start praying.

It’s a touch choice, especially for someone who asks the video store clerk for advice on whether to rent She-Vampires from Mars or Garden Tool Massacre. (The clerk was no help at all. I would have advised, constructively, “Bambi.” But nobody asks me these things.) Dras is a screw-up little brother, and it’s a tall order to suddenly become a man of God when you’ve never even been a man.

The hero’s journey in this novel is to grow up, but it’s not really a coming-of-age story. It’s more like a shaping-up story. I have to say I admire Dras as a character, and even more as a hero. Bogeymen are easy to find, and goblins are a dime a dozen. A twenty-two-year-old protagonist with the obsessions – and mode of transportation – of a twelve-year-old is more unique.

And believe me, The Strange Man needs all the lightening up it can get. There was too much violence for my liking, and occasionally the creepiness went too far. I’m all for the hero pedaling for his life from a horde of gremlins, but I draw the line at mind-controlling little girls, and Eldon Granger’s fate was unnecessary. The author would do well to ratchet back such factors.

He would also do well to more strictly maintain the viewpoint of his scenes. The style of the book is limited third-person, but there are times when it lapses. It’s not as limited as it ought to be. There are scenes that would be smoother, and ultimately more effective, if they were kept entirely to one character’s perspective.

All this notwithstanding, The Strange Man is a good book. Its religious element is strong and more profound than I first guessed. The pace is brisk. The ending was unexpected, and it had meaning and depth of emotion. Between that, and Dras, and the humor – this is the highlight reel – I enjoyed The Strange Man.

You can buy the novel on Amazon. I highly recommend checking out the author’s website; it has short stories featuring the characters of the Coming Evil Trilogy, and a fascinating author’s commentary on The Strange Man. The rest of the blog tour can be found here: