I liked The God-Hater. I thought I’d say that before I devoted a post to how it tripped over a peeve of mine.

The book has an important subplot revolving around corporate warfare – and that’s not a figure of speech. Myers called corporations the “warring nations of today”. I’ve seen this in science fiction before: the mega-corporation with military capabilities, imposing blockades, sending armies, taking upon itself matters of crime and punishment. It’s an old tradition of the genre.

And I never had much sympathy for it. Violence and justice as the prerogatives of anyone besides the government is a departure from thousands of years of western civilization. But in sci-fi it tends to be taken entirely for granted – as if it just follows, like the colonization of Mars.

I don’t believe the mega-corporation just follows, and I certainly don’t believe it’s already here. When, in The God-Hater, corporations conducted helicopter raids and got into machine-gun shoot-outs, it struck me as … silly. Corporations just don’t do that. It’s not in their make-up. They’re not the Mafia.

Try to picture the competition between Microsoft and Apple coming to gunfights between their employees. Can you imagine the headlines, the public reaction, the congressional hearings? Can you imagine how fast – how hard – the government would come down on them? The government hates it when people get violent, if for no other reason than that’s their job.

Granted, Travis Mackenzie’s computer program is far more valuable than Windows or the i-Phone. (But don’t be overly impressed by the idea that it could be worth more money than several nations. Wal-Mart’s annual revenues exceed the GDP of almost every nation.) Still, CEOs do not generally metamorphosize into Al Capone when facing lucrative projects. And if they did, the government would ruin them.

Myers severely stereotypes both capitalists and capitalism. It’s slander to say that all they care about is money. But even if that were so, the corporate warfare Myers paints is jarringly out of touch with reality. The “warring nations of today” are pretty much the same as the warring nations of yesterday. Just look at the Middle East.

“Not wanting to build a mere clocklike mechanism, you inadvertently – in your own punctilious way – created that which was possible, logical and inevitable, that which became the very antithesis of a mechanism …”

“The universe is infinite yet bounded.” So begins the Seventh Sally, the story of how Trurl’s perfection led to no good. The great constructor-benefactor once came upon a king exiled alone on an asteroid. The king insisted that the renowned constructor restore him to his kingdom, “and his iron fingers clutched the air, as if already closing around the throats of his beloved subjects.”

Naturally Trurl rejected the request. Yet he wanted to console the king, and so he built a tiny replica of a kingdom, contained in a box. Trurl perfected it so that the great Excelsius accepted it in the stead of his throne.

Trurl returned home in triumph, and told his friend Klapaucius how he had indulged the despot and protected his erstwhile subjects at the same time. And Klapaucius rebuked him: “Don’t you see, when the imitator is perfect, so must be the imitation, and the semblance becomes the truth, the pretense a reality! Trurl, you took an untold number of creatures capable of suffering and abandoned them forever to the rule of a wicked tyrant. … Trurl, you have committed a terrible crime!”

They rushed to save Excelsius’s small subjects, only to discover that they had saved themselves.

There is also the story of Aule. Impatient for the coming of the Children of Iluvatar, Elves and Men, he made children of his own. He made the Dwarves beneath the mountains of Middle Earth. And when he finished, he heard the voice of Iluvatar: “Why dost thou attempt a thing which thou knowest is beyond thy power and thy authority? For thou has from me as a gift thy own being only, and no more.”

And Aule, weeping, lifted up a hammer to destroy the Dwarves. But they shrank from him and begged for mercy, and again he heard Iluvatar, “Dost thou not see that these things have now a life of their own, and speak with their own voices? Else they would not have flinched from thy blow, nor from any command of thy will.”

Iluvatar had made the Dwarves the children of his adoption; he made them living beings.

Finally, there is the story of Travis and Nicholas Mackenzie. They have a world of “artificial intelligence. AI. Emotions, pattern recognition, free will, the ability to hold contradictory views … [H]uman consciousness. The whole enchilada.” It was difficult to create a digital world whose inhabitants think and act freely; preserving it may be more difficult yet.

The linchpin of The God-Hater is that a group of people managed to create beings with independent wills. The linchpin of Tolkien’s story is that only God can do that. Of course, in Bill Myers’ story the method was one Tolkien could not have imagined: computer programming. Bits and bytes, Travis calls his creations. Pixels and teraflops. But if they’re not real to him, they are very real to themselves – and each other.

My question here is not whether it is possible to make a computer program that becomes, like Adam, a living being. My question is whether that is what happened in The God-Hater. Emotionally, the book tugs strongly in that direction. But Myers never explicitly settled the question.

So let’s apply Klapaucius’ test. Remember his words to Trurl: When the imitation is perfect, the semblance becomes the truth, the pretense a reality. Travis stressed the perfection of his imitation, and his pretense of real, free beings became a reality.

Later in his argument with Trurl, Klapaucius gave an even more convincing test: “You say there’s no way of knowing whether Excelsius’ subjects groan, when beaten, purely because of the electrons hopping about inside – like wheels grinding out the mimicry of a voice – or whether they really groan, that is, because they honestly experience the pain? A pretty distinction, this! No, Trurl, a sufferer is not one who hands you his suffering, that you may touch it, weigh it, bite it like a coin; a sufferer is one who behaves like a sufferer!”

He might as well have said that a sufferer is one who suffers. And the one thing none of us can doubt, since we saw Alpha make his trip to the Killing Wall, is that they really do suffer.

Now here’s where things get dicey. When the whole thing ceases to be an elaborate computer game, role-playing God becomes a much more doubtful enterprise. Did anyone notice that when Alpha built a temple, he built it to Nicholas? And when he prayed, who was he praying to but Nicholas? In the end, these mimicries of humanity who became, by virtue of their ability to suffer and choose, really human – they have, as their God and Savior, Nicholas Mackenzie.

There’s something just not right about that.

It’s odd that Rebekah and Nicholas made such a big deal out of giving the – what can we call them, electronic humans? – the truth, because they never got close to it. The created-to-sell-soap thing isn’t even the biggest part of it. The greatest truth, the ultimate Reality, is God. Any existence blind to Him is necessarily starved.

I think this is a legitimate issue. I also think it’s beyond The God-Hater. Maybe Myers doesn’t really consider the digital world to be real. Or – and I lean toward this – maybe these questions are simply outside the scope of his book. Maybe it wasn’t mere oversight that Myers never resolved his AI beings’ relationship to the universe; then he’d have to resolve their relationship to the God of the universe. Make it clear that Alpha is a rational creature on the order of humans and angels, and you’ve jumped clear over Nicholas Mackenize’s head.

The intent of The God-Hater was to “justify God’s ways to man” by putting man in (analogically) God’s place. To transcend the man-made computer world to the world God made, to move the question to a much higher court – that may have derailed Myers’ purpose entirely. It would have made a different book, and not necessarily a better one.

The story of Aule and the Dwarves can be found in The Silmarillion. The Seventh Sally, or How Trurl’s Perfection Led to No Good, is in The Cyberiad. I once posted a review of it. 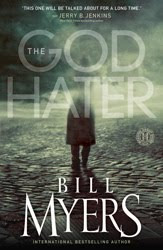