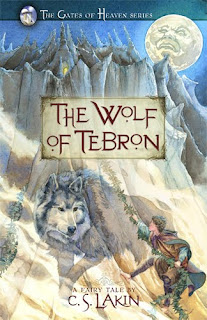 Most men would have to make a good guess, but Joran – lucky fellow – gets to know for sure. He will discover how far he is willing to go – how far he can go. For his extraordinary journey he has an extraordinary companion: the wolf of Tebron. The wolf is a fearsome and magnificent beast, with an endless supply of wise sayings and apparently nothing to do on the weekends.

The Wolf of Tebron is fantasy, and its world is “wild as an old wives’ tale”. It’s not merely that there’s magic; it’s that everyone knows there is. It isn’t only that people can mindspeak with animals; it’s that mindspeaking is simply a fact of life. The sea is a legend in Tebron, but Joran can believe it exists – almost as easily as he believes that the Moon has a house.

The forest of Tebron is formed by “tall trees with their tops in the heavens, and trunks so thick it would take ten men to circle one of them.” In this one stroke C. S. Lakin makes fairytale live in her story. It brings you, in a sudden rush, to Europe when its forests were huge and alien to the humans who lived alongside them. In folk tales the woods are their own domain – primeval, mysterious, filled with the secret homes of unguessable things.

This element of fantasy is the strongest part of the book. Even the vividness of the characters and the suspense of the plot are fed on it. Joran, as a character, is competent enough, but he doesn’t intrigue like his wise wolf, like the Moon – even the goose woman. You feel pretty sure, reading the novel, that Joran is going to find his wife eventually. You’re not so sure what’s going to happen when he reaches the house of the Moon. The two most compelling sequences of the book had our heroes contending against forces that were more than natural.

I said before that The Wolf of Tebron is its own world. There is no Christianity, no Judaism, no recognizable stand-in for either one. If the humans of Tebron have any regular practice of religion, I didn’t see it. Yet the book has a strong dose of Christian spirituality. At one point wolf and human discuss the “perfect law of freedom” – a phrase taken from James 1:25: “But the man who looks intently into the perfect law that gives freedom, and continues to do this …” Most fantasy novels, when they venture into the pronvinces of Scripture, settle in the Gospels. The Wolf of Tebron, with its allusions to the moral law, Original Sin, and “spiritual forces of evil”, wanders into the Epistles.

The Wolf of Tebron is a quest story, and it has much of the simplicity of the old fairytales. Also like the old fairytales, it has the wonder of a world outside Man’s, with laws that no scientist ever discovered. The spirit of wonder is well-matched by the book’s lyrical prose. If talking animals, anthropomorphic moons, and mysterious dreams ever tugged at your imagination, this book is for you.

The blog tour runs for three days. I am planning to post twice more – tomorrow on the spiritual aspect of The Wolf of Tebron, the day after on its designation as a YA novel. Much more can be learned about the book from:

– the other CSFF blog tour reviewers:

5 thoughts on “CSFF Blog Tour: The Wolf of Tebron”