The Strange Man opened with an old man telling the sad, strange tale of Joe Hallerin. At the end of the telling, he stood and roared the moral of his story: “And if the Strange Man ever come knockin’ at your door, don’t you ever, ever let him in!” 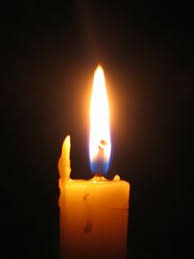 A few chapters later, a mother soothes her daughter’s fears of the bogeyman by giving her a candle  and the assurance, “Everybody knows that light keeps the bogeyman away.”

There are two powerful Christian points to be found in those statements, and I expected the novel’s moral to turn on them. I was more surprised when I found that the novel’s action turned on them.

The subtle imagery, the double meaning of the little girl’s candle and the old man’s story did not set the pattern for the book. The Strange Man is the most forwardly Christian novel I’ve read in a long while. There are two heavy-duty “witnessing” scenes. Greg Mitchell has some interesting comments on these. To quote him here:

Part of the thing I wanted to do back then with The Strange Man was show that “Hey. We can tell the gospel, but have all the other stuff too.” I wanted the message in there, sure, but also good characters and plots, excitement, etc, and to also turn the “gospel scene” on its ear–where it’s not a neat and tidy conclusion. It wasn’t until many years later that I discovered how vehemently some Christian writers are against this kind of scene period. They would say that this is a trademark of bad writing and that this is the reason “Christian Fiction” is not taken seriously by the literary world.

Conversion and witnessing scenes are often awkward – awkward to read and awkward to write. It can be – often has been – done very badly. But I don’t see how it can be rejected altogether. Accepting Jesus Christ is the most important, the most pivotal thing any human being can do. It is, the Bible says, crossing over from death to life. It’s reconciliation with God. And all that being so, how can we say it should never make its way into fiction?

I’m speaking, of course, on the basis of a shared belief. The “literary world” at large is not going to view a Christian conversion as a matter of eternal life and death. They may have a hard time taking books that do seriously.

I’m not saying we should dismiss their criticism out of hand. Some of it is valid. We can learn by listening. But why would we let secularists tell us how much Christianity is acceptable in a novel? It would be like a political party letting the opposition edit their campaign ads.

The failure in Christian media is not doing “altar scenes”, but doing them badly. You can make a point with art, but you have to do it artistically. That’s the thing. Whatever message a novel contains must come naturally from its story and characters. Quoting Greg Mitchell again:

I scrapped my old way of looking at things. This scene wasn’t about saying the right things for the Reader. This is Dras and Rosalyn’s lives on the line here. I focused on my characters–on Dras. After everything he’d been through in this story, what did he need to say to Rosalyn? I wrote this scene from the heart–Dras’ heart–to Rosalyn.

And I think that focus is just about perfect.

5 thoughts on “CSFF Blog Tour: The Art of the Point and the Point of the Art”