Last Saturday I rented a Denise Austen DVD from the library, and today I finally did its second workout: Yoga Sculpt. Basically you spend thirty minutes doing yoga exercises, only with a five-pound weight in each hand. This is why I need to post today. Tomorrow I might not be able to move my arms.

Independence Day is coming up, and my current reading is appropriate to it. Normally, w 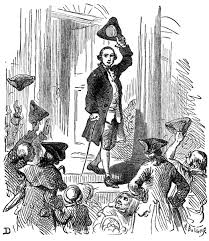 hen I read nonfiction it centers around modern events and people. Sometimes, however, I delve farther back. Right now I’m reading The Life of James Otis of Massachusetts, by William Tudor. James Otis is one of the most influential, least regarded leaders of the American Revolution. For example, when I mentioned his name you probably did not know who he was.

I’m just starting to learn. The biography I got from the library was published in 1823. It’s fascinating to read something written that long ago, to know how a man of that time thought and wrote. I’m only on Chapter Three, but already the author has paused twice to explain puritan customs to his readers. (He did not capitalize “puritan”.) Tudor and his audience were so much closer to the puritans than we are – yet even to them it was history.

In the Preface I found this comment: “When a well known foreign journal in all the triumph of insolent ignorance, asked, ‘Who Patrick Henry was?’ we only smiled at its impertinence.”

This is beautiful, and I’ll be remembering it for a long time – the triumph of insolent ignorance: Who is Patrick Henry?