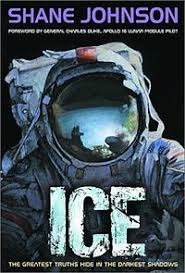 Suppose you went to the moon, and suppose you found somebody already there. Frozen, so no matter how many questions you ask, he’s never going to answer.

But the answers have to come from somewhere, and they do. C. S. Lewis once said that it is always shocking to meet life where we thought we were alone. It is also shocking to find something where we are sure there had never been anything.

NASA planned twenty lunar flights, but after Apollo 17 it canceled the remaining missions. Now, in Ice, Shane Johnson writes an alternate history of the space program, telling the story of Apollo 19. In February 1975 two astronauts, Gary Lucas and Charlie Shepherd, land near the lunar south pole. Forced to venture deep inside one of its canyons, they find, well, ice. It’s quite a surprise to men who hoped, at the most, to find some rocks worth analyzing. But it’s just a small jolt to get their heart rate up in preparation for the real shocks.

Ice reminds me greatly of Oxygen and The Fifth Man. Like that duology, it starts with real technology and what America could have chosen to do with it. Although the story is fiction, it reproduces NASA technology, procedures and jargon – I assume faithfully, but how would I know? I only know that, at some point, my eyes start to glaze over.

Not that the deficiency is in the book. In a novel about Apollo 20, you need realism about NASA and its space flights – even if Apollo 20 never took off. The author did not, in my judgment, go overboard with it. It’s just that, when a part becomes heavy in unrecognizable acronyms and science-textbook words, you tend to speed-read a bit. At least I do.

The style of Ice tended toward the omniscient, and there were moments that came off somewhat stiffly. But even with those, I found the book well-written to the point of achieving real beauty. Johnson shows his skill in story-telling in many ways. He manages to create passages with a sense of heartbreak and even of horror without being unduly explicit.

The story itself was unique. It had more science than most sci-fi – and also, in the end, more fantasy, too. Ice is freshly imagined and vividly portrayed; I‘ve never read another sci-fi novel quite like it. It may not be one of the most exciting novels I’ve ever read, but it is one of the most satisfying. I give it a wholehearted recommendation.