Last week, while searching for a picture of Cruella de Vil, I saw some of Disney’s early concept art for the character. I decided to take a look at it this week; pictures are fun, and so is the evolution of an idea. All these drawings are by Marc Davis. 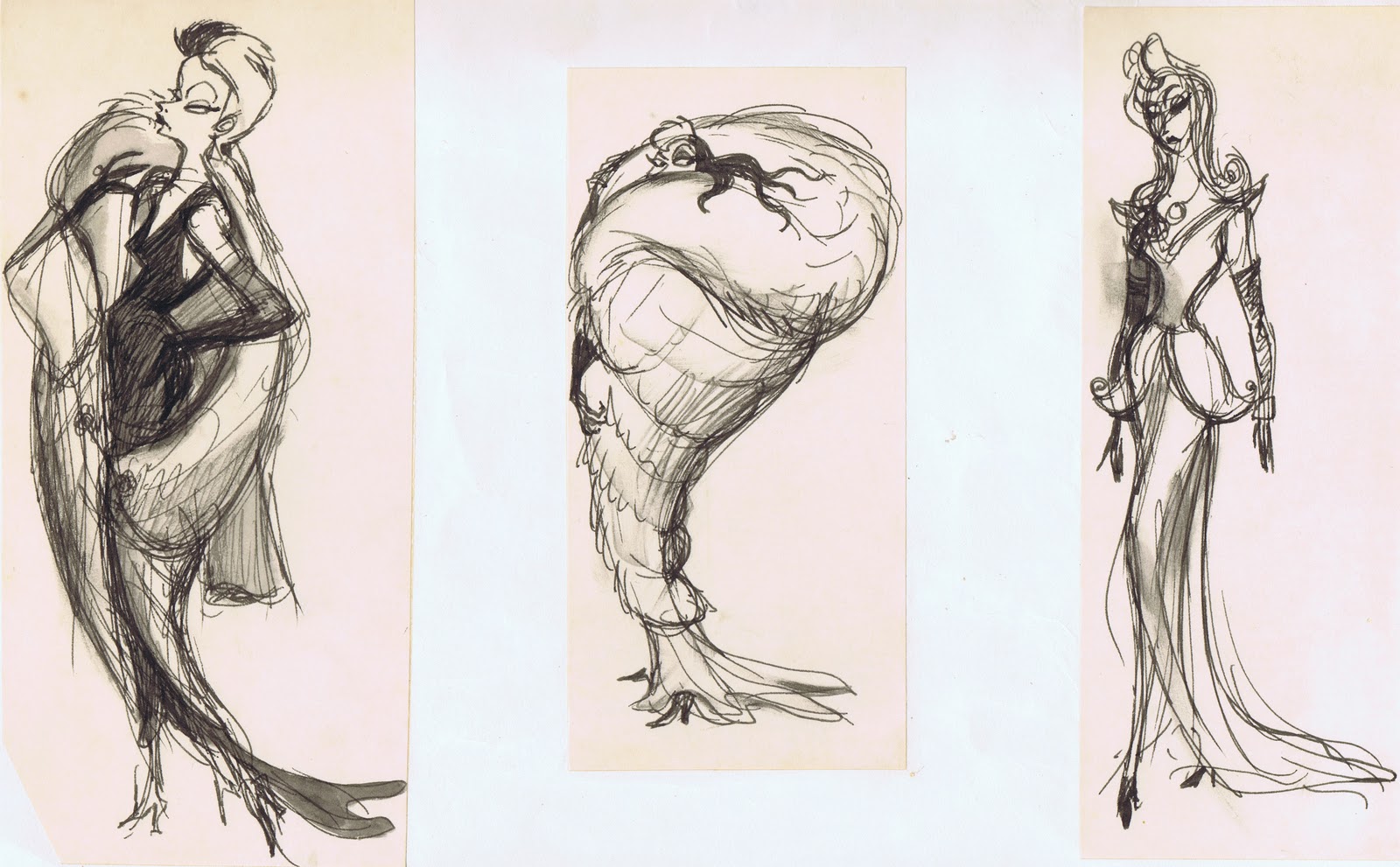 I don’t know that these are chronologically the earliest, but I would certainly guess so. The ideas are so different. The Cruella on the right is oddly reminiscent of Aurora in her blue gown; the Cruella in the middle is a comic extreme, a far cry from the princess look. You can hardly see her head poking from her enormous fur coat. The Cruella on the left is, of course, the general direction they took.

This Cruella looks rich and middle-aged, the sort of woman who would have a little dog on whom she lavishes gifts with price tags the size of mortgage payments.

Though, knowing Cruella de Vil, we know better.  Cruella de Vil is, to paraphrase G. K. Chesterton, fond of dogs only in a dark and sinister sense.

The Cruella on the right also looks like a society woman, but younger and probably flighty. I think the impression of youth and silliness comes from the long, bouncy hair, the extravagant gesture, the bracelet.

What’s fascinating about these Cruellas is how attractive and feminine they are;

the final Cruella was not mu ch of either. But to the great credit of Marc Davis, Cruella has a sinister edge even in her more beautiful incarnations.

On the right, Cruella is again reminiscent of the Disney princesses, only the resemblance is here more in the face and hair than the clothing. The Cruella on the left is rather unique; I can’t remember any woman in a Disney cartoon – good or evil – with a similar look.

Here Cruella looks a little crazy – which, to kidnap ninety-nine puppies in order to make coats of them, she’d have to be. But she still has a chic, refined look; nearly all the Cruel las in the concept art do. I wonder why that aspect is so faded in the movie.

The evolution of Cruella de Vil, as seen in this journey through old, discarded ideas, is an evolution away from the stately villainnesses of early Disney. The evil queen was the fairest in

the land for many years. Cruella never was. Cruella de Vil was the first of a new era of villainesses – much less beautiful, much more comic, much more, well, cartoonish.