The lights are laced through the branches of the Christmas tree – the same lights that have adorned our tree for twenty Christmases past. The bulbs are old, thick; they do not sparkle so much as glow deep colors over the evergreen needles.

A plastic crown tilts on the reaching topmost branch, a token of the King. Wooden sleds dangle among wooden angels, which still keep most of their gold and white glitter. One branch bends, tugged down by a ceramic Noah’s Ark. Another lightly bears a candy cane of pipe cleaners twisted together. 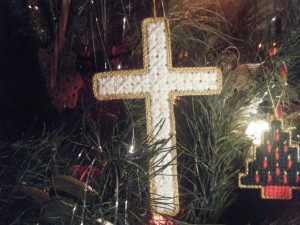 High among the branches hangs a white, gold-edged cross. The only ornament that matches it is a gilded dove, halfway down and on the other side of the tree. Nothing matches Larry the Cucumber, sporting pajamas and a nightcap as he stands perkily in front of his own Christmas tree. It’s plastic, but so is he.

Yarn Christmas wreaths are scattered high and low – red and white, green and white. One Christmas wreath is thin metal, golden once and tarnished now; a long-ago year is imprinted on it. Other ornaments have that touch – etched with names or dates, marked by family and friends.

Candy canes are hooked on the branches – decoration today, candy again as soon as Christmas Day is past. Tinsel icicles are draped on the branches; even the bent strands shine with every bit of light they snatch. Two or three ornaments are paper, made in some barely recalled Sunday school.

A quilted rug wraps around the tree stand, its red and green patches saluting the season. White squares are sewn in, and rocking horses seesaw over them. They remind me of another rocking horse, a real one back in my childhood, that was made by the hands that made the quilt.