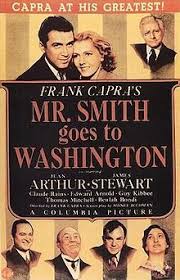 Stooges come in all shapes and sizes. Some are culpably stupid, some are innocently stupid, some are actively corrupt. Some stooges know that they’re stooges, and some don’t know even that. Many are bought men, and a few are only duped.

Jefferson Smith was another type of stooge – a tall, thin, Lincoln-quoting patriot, a leader not of men but of boys – boy rangers. They made him a senator because no one could complain that he was part of the machine, and he would still vote with them all the way. He didn’t know any better.

Mr. Smith Goes to Washington, made by Frank Capra in 1939, stars Jimmy Stewart as Jeff Smith, Diogenes’ honest man. This David-and-Goliath tale belongs, like its brother It’s a Wonderful Life, to that genre once called corn-a-Capra. But it is a mistake to equate either movie’s happy ending and assurance of goodness with shallowness.

The writers and the actors bring out, between them, an unusually broad array of characters that seem like people. A few are one-trick acts, but most appear with human complexity. There is the governor whose cowardice – in a wholly accidental moment of glory – is conquered by his self-interest. A reporter introduced as a slob, his gallant offer of marriage (“I’d cherish you, and I’d stay sober”) refused, further on shows sense and even decency. The Speaker, wonderfully acted, is just enough on the hero’s side to give him a chance – and no more.

Clarissa Saunders – a brilliant foil to Stewart’s Jeff Smith – takes contradictory actions and still keeps her integrity as a character. She is complete enough, in her personality and motivations, to do so.

That same quality is possessed by Thomas Paine, the Silver Knight. We are told where he began, and we see where he ended; watching the story unfold, we can piece together his journey. As Jeff is the man Paine used to be, Paine is the man Jeff could become.

Parts of the movie are dated to the point of being historically interesting. One man’s political machine “muzzles a whole state”, at almost the last time in American history such a thing would be possible. A few general mentions are made of the hard times the country faced; the movie was released, after all, when America was in the grip of 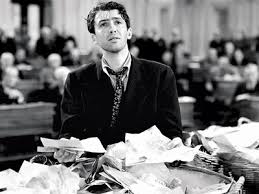 the Depression and Europe was boiling over into World War II.

More than anything else, Mr. Smith Goes to Washington is a story about ideals – what price you pay to keep them, what price you pay to lose them. It’s about causes worth fighting for, causes worth dying for – and why. It soars into a wonderful movie, a drama mixed with comedy and delivered with superb acting. The death of naivete is the triumph of idealism, when Mr. Smith goes to Washington.