Yesterday I mentioned G. K. Chesterton’s opinion that pagans practiced demonic rites because they knew they were terrible. Today I will provide excerpts from The Everlasting Man where he wrote this.

This passage also touches on the issue of magic in Christian fiction, which Becky Miller raised in her post. I believe that Christians who categorically reject all “magic” in fiction are misguided, but not as misguided as people who breezily accept all magic without a thought. Witchcraft, under all its various names, is a great evil, and also a great danger. If we are going to handle it properly – even in reading and writing fiction – first we must understand it properly.

Chesterton wrote of the fictional King Dives: “The mills of God grind slowly, and he works with other mills.” And the root of both witchcraft and human sacrifice, as Chesterton illustrates in The Everlasting Man, is a desire to work with other mills. 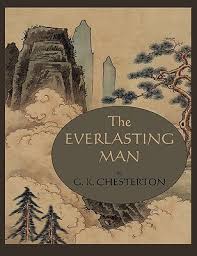 Whether it be because the Fall has really brought men nearer to less desirable neighbours in the spiritual world, or whether it is merely that the mood of men eager or greedy finds it easier to imagine evil, I believe that the black magic of witchcraft has been much more practical and much less poetical than the white magic of mythology. I fancy the garden of the witch has been kept much more carefully than the woodland of the nymph. I fancy the evil field has even been more fruitful than the good. To start with, some impulse, perhaps a sort of desperate impulse, drove men to the darker powers when dealing with practical problems. There was a sort of secret and perverse feeling that the darker powers would really do things; that they had no nonsense about them. And indeed that popular phase exactly expresses the point. The gods of mere mythology had a great deal of nonsense about them. They had a great deal of good nonsense about them; in the happy and hilarious sense in which we talk of the nonsense of Jabberwocky or the Land where Jumblies live. But the man consulting a demon felt as many a man has felt in consulting a detective, especially a private detective; that it was dirty work but the work would really be done. A man did not exactly go into the wood to meet a nymph; he rather went with the hope of meeting a nymph. It was an adventure rather than an assignation. But the devil really kept his appointments and even in one sense kept his promises; even if a man sometimes wished afterwards, like Macbeth, that he had broken them.

In the accounts given us of many rude or savage races we gather that the cult of demons often came after the cult of deities, and even after the cult of one single and supreme deity. It may be suspected that in almost all such places the higher deity is felt to be too far off for appeal in certain petty matters, and men invoke the spirits because they are in a more literal sense familiar spirits. But with the idea of employing the demons who get things done, a new idea appears more worthy of the demons. It may indeed be truly described as the idea of being worthy of the demons; of making oneself fit for their fastidious and exacting society. Superstition of the lighter sort toys with the idea that some trifle, some small gesture such as throwing the salt, may touch the hidden spring that works the mysterious machinery of the world. And there is after all something in the idea of such an Open Sesame. But with the appeal to lower spirits comes the horrible notion that the gesture must not only be very small but very low; that it must be a monkey trick of an utterly ugly and unworthy sort. Sooner or later a man deliberately sets himself to do the most disgusting thing he can think of. It is felt that the extreme of evil will extort a sort of attention or answer from the evil powers under the surface of the world. This is the meaning of most of the cannibalism in the world. For most cannibalism is not a primitive or even a bestial habit. It is artificial and even artistic, a sort of art for art’s sake. Men do not do it because they do not think it horrible; but, on the contrary, because they do think it horrible. They wish, in the most literal sense, to sup on horrors. That is why it is often found that rude races like the Australian natives are not cannibals; while much more refined and intelligent races, like the New Zealand Maories, occasionally are. They are refined and intelligent enough to indulge sometimes in a self-conscious diabolism. But if we could understand their minds, or even really understand their language, we should probably find that they were not acting as ignorant, that is as innocent cannibals. They are not doing it because they do not think it wrong, but precisely because they do think it wrong. They are acting like a Parisian decadent at a Black Mass. But the Black Mass has to hide underground from the presence of the real Mass. In other words, the demons have really been in hiding since the coming of Christ on earth. … In the ancient world the demons often wandered abroad like dragons. They could be positively and publicly enthroned as gods. Their enormous images could be set up in public temples in the centre of populous cities. And all over the world the traces can be found of this striking and solid fact, so curiously overlooked by the moderns who speak of all such evil as primitive and early in evolution, that as a matter of fact some of the very highest civilisations of the world were the very places where the horns of Satan were exalted, not only to the stars but in the face of the sun.

Take for example the Aztecs and American Indians of the ancient empires of Mexico and Peru. They were at least as elaborate as Egypt or China … Swinburne, in that spirited chorus of the nations in ‘Songs before Sunrise,’ used an expression about Spain in her South American conquests which always struck me as very strange. He said something about ‘her sins and sons through sinless lands dispersed,’ and how they ‘made accursed the name of man and thrice accursed the name of God.’ It may be reasonable enough that he should say the Spaniards were sinful, but why in the world should he say that the South Americans were sinless? Why should he have supposed that continent to be exclusively populated by archangels or saints perfect in heaven? It would be a strong thing to say of the most respectable neighbourhood; but when we come to think of what we really do know of that society the remark is rather funny. We know that the sinless priests of this sinless people worshipped sinless gods, who accepted as the nectar and ambrosia of their sunny paradise nothing but incessant human sacrifice accompanied by horrible torments. We may note also in the mythology of this American civilisation that element of reversal or violence against instinct of which Dante wrote; which runs backwards everywhere through the unnatural religion of the demons. It is notable not only in ethics but in aesthetics. A South American idol was made as ugly as possible, as a Greek image was made as beautiful as possible. They were seeking the secret of power, by working backwards against their own nature and the nature of things. There was always a sort of yearning to carve at last, in gold or granite or the dark red timber of the forests, a face at which the sky itself would break like a cracked mirror.