Thomas Jefferson once wrote, “Great innovations should not be forced on slender majorities.” Which is pretty much what happened with the Constitution. 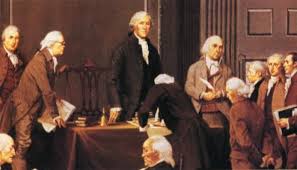 n had created a remarkably weak Continental Congress, lacking the power to carry through even what few decisions it had the authority to make. It could create an army but not fund it, borrow money but not repay it, make treaties but not fulfill them.

So the Founders – frustrated by the paralyzing weakness and afraid of its consequences – finally brought about the Constitution.

It began with a trade convention in Annapolis, where twelve delegates from five states met for three days. They found that “the power of regulating trade is of such comprehensive extent, and will enter so far into the general System of the federal government, that to give it efficacy, and to obviate questions and doubts concerning its precise nature and limits, may require a correspondent adjustment of other parts of the Federal System.”

The Congress took the suggestion and issued a call for the Philadelphia convention. Fifty-five delegates from twelve states* attended. Not only did they create a new Constitution for the country, they even created the terms by which it was to be accepted or rejected.

If you care to remember such details, the Continental Congress was the governing body of the American union. But the convention essentially cut them out. They put the Constitution before the states for ratification, with the regulation that when nine states had ratified, the new government would take effect.

To appreciate the boldness of this, you have to understand that the Articles of Confederation could be revised only by the approval of the Congress and the unanimous consent of all the state legislatures. You also have to remember that the Philadelphia convention met by the authority of the Continental Congress, and then arranged to supplant the Congress without ever getting their leave.

In a final stroke of audacity, the convention stated that – at such time as nine states ratified the Constitution – the Congress should fix the date for the elections of the new Congress and the takeover** of the new government. The Continental Congress was requested to manage its dissolution.***

* Rhode Island sent no delegation. The convention didn’t act like it mattered.

** They called it “commencing Proceedings”. To be an eighteenth-century legislator!

**** Of all the votes listed here, this was the Federalists’ widest margin of victory – and even here, ten votes would have changed it to defeat. The rest of the tallies may be found here.