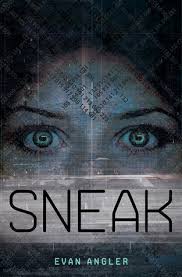 When you are a refugee from an evil government and its secret police, when your ambition is to pull a prison break at a fortress of a prison, when you are variously counted a criminal, a traitor, an outcast, and a target – what do you do? Well, for starters, you sneak.

Sneak is the second installment of the story Evan Angler began in Swipe. Logan, now among the Dust, is on a mission to save his sister; he has a city to go to, a name to look for – Acheron, the ultimate bane of the Markless. On the road they find stories of Acheron. Whether or not they’ve found truth – well, that they won’t know until they can get to Acheron and see for themselves.

Sneak explores deeper the world rising from the devastation of global warming and Total War. That world grows more elaborately dystopian, and in this second book, the series becomes definitely Christian and unmistakably End Times. I had hoped the books were not going in that direction, because it’s not the sort of thing that naturally appeals to me. But if you’re going to do it, this is the way to.

Knowing Revelation, one can see various fulfillments in Swipe and Sneak. Yet they come in unexpected ways, flavored and influenced by the particular world of the novels. And they come unheralded, and even gradually – far more interesting, and even more believable, than the seven years of cataclysm found in other End Times works.

The pace of Sneak is brisk enough to keep away boredom, and slow enough that readers are not left confused. Certain events were skimmed past with hardly a glance, but they were peripheral to the actual experiences of the characters, and maybe that is the nature of a middle-grade book. On the same front, I found the main character too rash – but again, maybe that is the nature of thirteen-year-old boys who have abruptly been torn from all that was stable in their lives.

What I appreciated most about this book was the inventiveness with which the author handled his world and End Times prophecies. He had a flair with his characters, too, and managed to support a large cast and make most of them distinctive. Sneak leaves more going than Swipe did, while also leaving less of an idea of where the characters will turn next. So here’s to the next book, and the author’s skill that keeps readers coming back.

Sneak is the second book in the Swipe series. Yes, we are getting there: to Storm, the one under the spotlight.