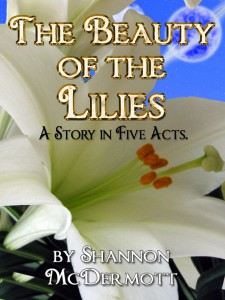 Of all the stories I have written, this is the only one whose nucleus was a character. In The Last Heir, Elymas Vonran – the Premier of the Assembly – asserts, “A passive emperor is still the emperor.” In the first drafts of that scene, Vonran then cited a historical example: Emperor Jediah, “who devoted himself to his family and his painting”.

Eventually I cut this, moving the Premier directly from his assertion to his point. But I never forgot about the painting emperor. I wanted to write a story about him, and when I finally set myself to the task, I had two thoughts. The first was: This could be funny. The second was: This could be sad. From this, the whole story came.

The whole foundation I laid down for the story – the plots, the other characters – was measured according to Jediah. I wanted to paint, as it were, the painting emperor. Beauty of the Lilies is the portrait I ended up creating. A companion piece, Summer Leaves, is to be released next month.

This weekend, October 12 and 13, Beauty of the Lilies will be available for free download. If you read and enjoy it, please consider leaving a review on its Amazon page or a rating on its Goodreads page.

Another description of the novella, along with the prologue, may be found here; I also published an Author’s Commentary in Part I, Part II, and Part III.