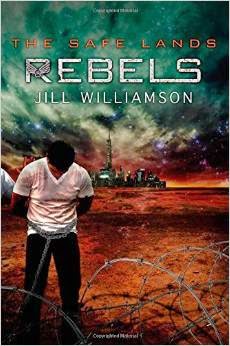 At the ripe old age of forty, all the citizens of the Safe Lands are “liberated”, sent by their government into Bliss. No one is certain what, exactly, that means, but Omar and Mason are about to find out. “Find pleasure in Bliss,” the liberator says, but it won’t be easy.

Meanwhile, in the Safe Lands, the subversion of the Glenrock exiles and the separatist Kindred continues.

Rebels is the final book of the Safe Lands Trilogy, written by Jill Williamson. This dystopian series, set fifty years and more into the future, is intended for teens but suited for older audiences, though not necessarily younger ones. Williamson deals with heavy themes, such as addiction, temptation, and promiscuity.

As the last book in its series, Rebels delivers on the promises of the preceding books, unveiling long-maintained mysteries and bringing character arcs to realistic and satisfying conclusions. I thought Williamson showed very good judgment about what, in the story, needed to be solved or answered, and what could be left open. Not everything was absolutely concluded, but the story ended with a sense of completion. It’s a fine line for an author between a story that feels unresolved and a story that feels like it goes on after the book is closed, but Williamson managed to walk it.

There were some twists in this book. I liked the surprise role of Luella Flynn, and the idea of the truth as the “lynchpin”. The truth is dangerous to a society built on lies.

However – and I need to turn on my SPOILER ALERT here – I thought it strange that such a controlling government did so little to keep the truth from coming out. Could no one think to cut the power to the ColorCast? I also think Rebels would have done a better job of selling the downfall of the Safe Lands government if it had evoked more powerfully a sense of chaos in the city. It mentioned riots – but only briefly, and only after the climax was over. If our heroes had confronted the Ancients while the city was engulfed in riots, it would have made the rulers’ capitulation more believable, and the story itself more exciting.

The level of typos in this book was, for a professionally produced book, high; I don’t know if the publisher had a too-tight deadline or a shortage of copyeditors, but I suspect the problem goes beyond this particular novel. I noticed errors in the last book I read by this publisher, though notably fewer.

Rebels is a strong conclusion to the Safe Lands Trilogy, bringing the characters to complex, realistic fates and completing the Safe Lands as a convincing, chilling dystopia. Recommended, with its preceding books, to readers of sci-fi and dystopian.