last year of the Civil War, Confederate leaders in Charleston, South Carolina turned the city’s horse-racing track (the Race Course, they called it) into a prisoner-of-war camp. They herded Union soldiers into the track’s interior, forcing them to live there without any shelter. In these miserable conditions, 257 Union soldiers died. The Confederates buried them in unmarked graves at the Race Course.

On February 18, 1865, the mayor of Charleston surrendered to Union forces. A mass exodus of white citizens surrounded the fall of Charleston, but thousands of blacks remained in the city, most of them newly freed slaves. And they remembered the suffering of the soldiers at the Race Course.

In April of 1865, twenty-eight black men from one of Charleston’s churches re-buried the dead, turning the hasty graves into neat rows. They erected a fence around the gravesite, ten feet high, and whitewashed it; over the gate they built an arch and inscribed on it: “Martyrs of the Race Course”.

On May 1, a procession of 10,000 people marched to the graveyard and dedicated it with prayers, Bible readings, and songs. They laid spring blossoms on the graves until “the holy mounds – the tops, the sides, and the spaces between them – were one mass of flowers, not a speck of earth could be seen; and as the breeze wafted the sweet perfumes from them, outside and beyond … there were few eyes among those who knew the meaning of the ceremony that were not dim with tears of joy.” (a newspaperman who witnessed the event, quoted by David W. Blight)

There were other ceremonies, other commemorations of the Civil War dead, and in 1868 Major General John Logan established Decoration Day. In his order to his posts to decorate the graves of the fallen, he wrote, “Let no neglect, no ravages of time, testify to the present or to the coming generations that we have forgotten as a people the cost of a free and undivided republic.”

Like the freed slaves of Charleston, he not only gave recognition to the soldiers’ suffering; he gave it meaning.

An effective, if grim, teacher of how vitally that matters is the special bitterness of those wars regarded as pointless – the Vietnam War, for example, or the First World War. Rightly or wrongly, but undeniably painfully, the dead in such wars are felt to be not only lost but “wasted” (as one Vietnam veteran put it).

Paul Johnson captured the bitterness of apparently meaningless suffering in his essay on T.S. Eliot:

It [WWI] was a war without hope or heroic adventure – just a dull misery of loss and pain – which induced in the participants, serving in the trenches or suffering vicariously at home, an overwhelming sense of heartache. The times seemed to have no redeeming feature; mankind appeared to be undergoing the agony of the war with no compensating gain in virtue but merely the additional degradation that the infliction of death and cruelty brings. It was unmitigated waste. So, equally, was Eliot’s marriage, both parties to it enduring suffering without a mitigating sense of redemption, just two wasted lives joined in sorrow. [Paul Johnson, Creators]

Which I bring up not to make a historical statement on the meaning or consequences of any war, let alone to make valuations of suffering; I only want to show how the human heart recoils from suffering without meaning.

Conflict is vital to stories. So, in a way, is suffering, however slight it may sometimes be. The very nature of the story pulls to give it meaning – by giving the root and final end of the suffering, by weaving it into a much greater whole.

This is one of the great satisfactions of fiction. All too often, in the real world, suffering has no point anyone can see and struggles are barren, yielding no fruit. But we hope – sometimes we can even believe – that if the whole story of the universe were told, if the tapestry of the million threads could be unrolled, then maybe we could find some redemption for the things that have none. 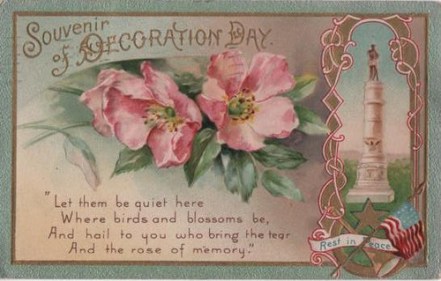 Of course, that story isn’t told; it isn’t even over yet. But in the finished stories of fiction, we see the ultimate ends and, with them, the ultimate meaning.

Not, of course, that all stories do end with redemption of suffering, or hope; some storytellers prefer the poetry of World War I, the mood caught by T.S. Eliot. (“We are the hollow men …”) But the greatest beauty is found in, well, the freed slaves’ memorial to the Union soldiers – where suffering has meaning and tears are iridescent.