There are many stereotypes of the Irish, and no doubt most of have some antecedent in reality: the 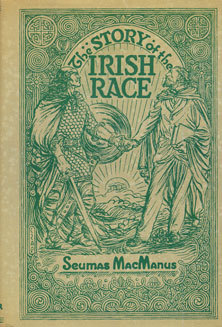 policeman with a brogue, the corrupt politician of Tammany Hall, the talker, the fighter, the drunk, the priest. Behind all these figures, familiar and sometimes even comic, shimmers a history of tragedy and of glory. Often this history is neglected. To remedy this neglect, Seumas MacManus wrote The Story of the Irish Race: A Popular History (first published in 1921, with later editions covering until the end of the 1930s).

On the first page of this book, the author calls it a “crude compendium” and “a rough and ready sketch.” Perhaps so, but at 725 pages and a historical span of nearly three thousand years, it is quite a sketch.

To his credit, the author makes no pretensions to neutrality. He declares on the first page that the purpose of this rough and ready sketch is to provide a history of Ireland for her people and exiles (and descendants of those exiles – of whom I am one). This is a book of the Irish, by the Irish, and for the Irish.

A more rigorous book might have been written, as the author acknowledges at the outset. The opening chapters consist greatly of speculation about the historical basis of Irish legends, especially those of the Tuatha De Danann. The later chapters are strong and unequivocal in their anti-British viewpoint. They are not, however, hateful. (And reading the accounts of Britain’s conquest and keeping of Ireland – including atrocities of murder, rape, and torture – and the ruthless self-interest with which Great Britain ruled the Irish, and the oppressive laws with which it sought to disenfranchise and degrade an entire people … well, I could see why many of the Irish have hated the English. I felt I could come to hate them myself.*)

The book’s clear Irish viewpoint, once recognized, is valuable in understanding the Irish viewpoint. There is also a kind of richness that flows from this viewpoint, from reading of Ireland from someone who loves Ireland. The author’s pleasure in the lore and songs and poetry of Ireland, his love of it through every defeat and misfortune, his delight in its glories – all of this shines through the pages.

The author may well be biased (and his expressed opinions are, of course, not infallible). Yet this is not propaganda. The author means to provide history. He recounts events that reflect poorly on the Irish and provides support for anti-English or pro-Irish statements from sources that have no bias in favor of Ireland (and perhaps some in favor of England).

This book is flavored with deep emotion, sharpened with strong opinions. It is also filled with apt quotations, powerful details, and colorful sketches of great characters. The author shows great skill in what he chooses to relate and how, and wholly avoids the dryness that comes of too much attention to statistics and too little attention to the individual stories that make up the great arc of history.

The Story of the Irish Race is not a definitive history of Ireland, but probably no single book could be. Whatever its limits, it is written with respect for the truth and love for Ireland. It reprises Irish history too little known in America and reflects the Irish spirit that has so doggedly resisted domination down through the centuries.

And it quotes poetry in the footnotes and sometimes in the text itself. What more could you want?

*In case the tone of this statement is misunderstood, let me clarify: I don’t hate the English.