― C.S. Lewis, The Lion, the Witch, and the Wardrobe

I should say, in fairness, that every type of story opens windows on human nature. I hope I can add with accuracy, if not objectivity, that speculative fiction holds a special ability to highlight certain of humanity’s psychological quirks. It highlights, for example, the psychological quirk that humans are 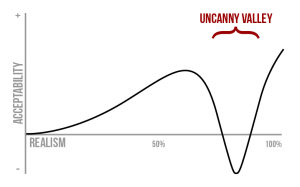 unnerved by things that ought to be human and don’t quite make it, both pretend-humans and ex-humans.

The horror genre makes the most hay of this phenomenon, what with zombies and vampires and ghosts – all ex-humans, in one way or another. It would be appropriate, given the season, to focus on horror and its almost epic exploitation, and thus illumination, of humanity’s dread of the almost-human. But I won’t, because I have never really liked any ghost story since A Christmas Carol, and I hate zombies beyond my power of expression, and although the memories will someday mercifully fade, vampires inevitably call up Twilight.

Other forms of speculative fiction make milder appeals to the same uneasiness. C.S. Lewis wove it into the White Witch. Folk lore and fairy tales, the progenitors of modern speculative fiction, have their own examples (including ghosts, of course, but I’m still not going to talk about them). Among the most compelling examples is that of the hollow women: beautiful and smiling, but their backs are hollow. At their worst, they are malevolent seductresses, and pitiless even when they are harmless. Changelings, both infant and adult, are in their own way even more sinister: The cold, creeping feeling of a stranger who should be human can’t match the horror of a loved one who isn’t.

Science fiction has made its own variation of the theme. The (in)famous Pod People are only a refitted version of changelings, replicas all the more chilling for their precision. Sci-fi has accumulated standbys and tropes for things that are, in Lewis’ words, going to be human and aren’t yet: aliens that sham humanity, human bodies hijacked by parasites, robots that are human at the first glance and not at the second.

Robots merit particular attention because here science caught up with fiction. Masahiro Mori, a Japanese roboticist, theorized nearly fifty years ago that robots, approaching human likeness but not quite reaching it, would fall into the uncanny valley. In the uncanny valley, both too much and not enough like humans, robots provoke unease and revulsion. Mori speculated that our “eerie sensation” is an instinct that protects us from the proximal dangers of corpses and members of different species. Some think it may be triggered by the dissonance between the human and inhuman mingled together.

Whether dissonance, survival instinct, or a deeper, more mysterious instinct, the phenomenon is real. There is a queasy line between us and not-us, between human and once-human. We felt it in our stories long before scientists labeled it.