Sir Bors set out on the Quest for the Holy Grail, but he spent most of the appointed year in prison because (it can happen) he made an unscheduled stop to proclaim the Gospel to apparently unreceptive heathens. “They knew much of magic,” he later told King Arthur, “but little of God.” (quoted from Maude L. Radford’s King Arthur and His Knights)

This formulation – much of magic, little of God – is striking in any case, but particularly so because it occurs in an Arthurian story. Although this is often neglected in modern retellings, the Arthurian legends combined Christianity with magic, pagan legends with culled elements of Christianized Britain. Classic versions of the sword-in-the-stone 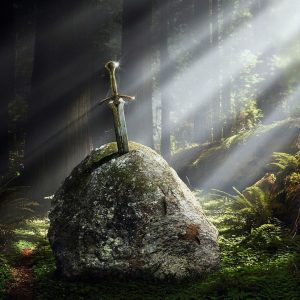 legend put “the wise magician” Merlin working together with the Archbishop of Canterbury to find a new king for the Britons. And still the association of magic with heathenism: much magic, little God.

There is tension between the Church that makes common cause with magicians and the heathens full of magic, but perhaps not contradiction. The authors of the Arthurian myth found they could broker an accommodation between Christians and magic. Yet they could rarely have missed the accommodation between pagans and magic, typified in the Druids whose memory outlived their presence. The sort of magic that most famously imbues Arthurian myth – the magic sword, the wise man who saw the future, the Lady of the Lake – is not witchcraft. Yet it remains, in itself, ambivalent. Despite the rumors, there is no inexorable link between magic and the devil, but neither is there any inexorable link between magic and God.

I’ve seen the link between magic and God made; probably all of you have. There is more than one way to weave magic into the framework of Christian doctrine and Christian principles. C.S. Lewis’ way – carving out a place for magic in an explicitly Christian universe – is the most obvious. Another method, popular in modern Christian fantasy, is to fix a magical world beneath God (often called the Creator, the Eternal One, etc.), without venturing any further in Christian belief than monotheism. J.R.R. Tolkien is the premier example of the most subtle method. The Hobbit and The Lord of the Rings show little overt religion, but his posthumous works reveal his efforts to bring his creation into harmony with Christian thought. The influence of Tolkien’s faith on his work is indelible. (In this lengthy but thoughtful essay, Steven Graydanus examines how Tolkien’s Catholicism shaped his portrayal of magic.)

Much fantasy is created by people who have no interest in taming magic to Christianity. That alone doesn’t make it bad; I once read a charming, perfectly innocuous children’s book called The Enchanted Castle, in which I found nothing to condemn or to call Christian. Yet the portrayal of magic in fiction isn’t always innocuous. Nor is it bound to keep its customary ambivalence; it may be remade into more sinister forms. The categorical rejection of all fictional magic is mistaken, but there is a shade of legitimate warning down at the roots.

Because it may justly be said of some books, as it is justly said of some people, that they know much of magic and little of God.