When Disney released Mary Poppins Returns – a sequel 55 years coming – I had such faith that I waited to see the film until it had been released on DVD. If I had realized how closely and consciously the sequel paralleled the original, my faith would have been even less. It is, then, with some astonishment that I report that the parallelism worked and was, in fact, one of the film’s best aspects.

You should understand that this is contrary to my instincts. Of all the things that make sequels a bore, the tendency to retread the original leads the pack. As for remakes, there is no point to their existence if they retell instead of revise. Yet Mary Poppins Returns built itself by the plumb line of Mary Poppins, and in that decision it succeeded. This unlikely success was, I think, made by two principal factors.

Crucially, Mary Poppins Returns threads the needle of paralleling the 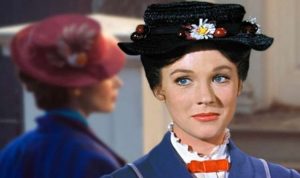 original without mirroring it. As you know, parallelism is the art of pleasing correspondence. There can be a fine line between that and repetition, especially in parallelism’s more elaborate forms. Mary Poppins Returns stays on the right side of that line, with much credit due to the fact that it has the flavor of emerging from the same universe as the original Mary Poppins. I don’t know enough of the P.L. Travers books to know whether Cousin Topsy, the leeries, and the adventure “in china” are inspired by them. But they feel as if they might have been. You feel, within the films, that they are similar because they belong to the same world, where London’s cobbled streets twist into nooks where relatives defy physical laws and proper Victorian nurseries contain worlds hidden in plain sight on the mantelpiece.

Emily Blunt’s delightful performance gives significant support to the movie’s cause. Wisely declining to imitate the inimitable Julie Andrews, Blunt offers a different interpretation of Mary Poppins: less sugar, more spice. Yet it is still Mary Poppins, more of the books than of the classic movie. Blunt adds the distinction, retains the similarity. Mary Poppins still glides through – and over – the world with command and self-possession. And if she is sharper now than when we first met her, still that sharpness was present before; if she was more tender then, that tenderness is yet found now.

The primary reason that the parallelism succeeds as it does is that it is an eternal part of the idea of Mary Poppins. In the first movie, Mary Poppins archly reminds Michael and Jane of all the children she has said good-bye to. Bert – ever canny in the ways of Mary Poppins – is no more surprised to see her go than he was to see her come, and he closes the movie with his farewell: “Don’t stay away too long.” This is simply what Mary Poppins does, simply who she is: alighting where she pleases, working magic and chaos, and all in the spirit of Elijah, to turn the hearts of the fathers to their children. Bert assures us that what is about to happen in Mary Poppins has all happened before. Mary Poppins Returns shows us it all happening again.

Mary Poppins Returns succeeds in its imitation because it does not repeat the original film; it rhymes with it. In well-executed rhyme, the sameness of structure and certain sounds is a pleasing thing. We understand, moreover, that Mary Poppins doesn’t really end or begin. We have, in these two films, neither beginning nor ending, but two verses in a song that plays mostly outside our hearing.