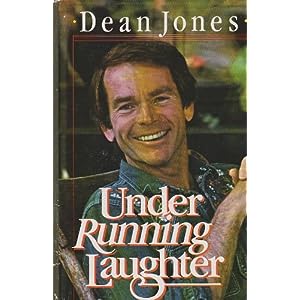 That Darn Cat was Hayley Mills’ last movie for Walt Disney, and Dean Jones’ first. Hayley Mills moved on, but Dean Jones remained a Disney star for the next decade. He presented the perfect Disney image: clean-cut, handsome, all-American.

Behind the image was a wild life, a man going through an endless line of beautiful women and risking his life in motorcycle stunts and speeding cars. And hidden in the midst of fame, money and reckless pleasure was his “very private hell”.

This book, as Dean Jones wrote in the foreword, is not primarily about his journey from Alabama boy to movie star, or about Hollywood. Jones starts his autobiography in the late 1960s. He does flash back once or twice, but it is always brief. Those years were ones of professional triumph for Jones; The Love Bug came out then. In 1970 he starred in a smash Broadway hit. He left the show after only a few months, because, as he told a friend, “Nothing but nothing is half as good as you expect.”

There is an anecdote that poignantly illustrates this time in Dean Jones’ life. After he became a Christian he found, going through a pile of mementos, an old picture of his daughter:

“Daddy didn’t know anything good or true or lasting, little angel,” I replied out loud.

Daddy didn’t know anything good or true or lasting. Not when his daughters were little; not for years before or after.

Once, preparing for a theater stint, Dean Jones looked across thousands of empty seats, and a voice whispered in his mind, This will never satisfy you. It turned to a refrain: all the trappings of being a star, the applause, the money, the women – This will never satisfy you. Later, alone in the theater, he thought, Someday I’ll kill myself. Not tonight, not next week, but someday I’ll put a shotgun in my mouth, like Hemingway, and blow the top of my head off.

A few days later, the pain and futility of all his adult life sent Dean Jones back to the God he had once rejected, with only “pitiful pleadings for shelter and asylum”.

When Jones told his girlfriend that he gave his life to God, she asked, “You’re not going to change, are you?”

Oh, I hope so, he thought. I sincerely hope so.

In truth, it was a long road. For a year he bobbed back and forth between joy and discouragement, spiritual progress and defeat. Then, with his marriage, the change began. He and his wife began attending church, and that was when his new faith really took root and began to grow. Still, the battles continued. The following chapters track a long period of often painful change and healing.

I suppose Dean Jones authored his autobiography alone. I could find no other name on it. It covers roughly a decade and, at 185 pages, doesn’t do so exhaustively. But the book doesn’t feel rushed, or undetailed. Dean Jones tells the story he wants to tell, and it doesn’t need accounts of his hit movies or the famous people he knew.

At the end of the book, Jones tells a friend, “You get tired of my making everything a big deal, but if you won’t let me talk about your experience, then I’ll talk about mine. God has taken this depressed, self-centered, completely empty person and filled me with a capacity to love beyond myself. He’s caused me to love all three of you more than my own life. And that’s a miracle – the greatest miracle imaginable.”

That is the story he tells in Under Running Laughter. He relates profound experiences, fascinating stories, a conversation with Walt Disney and daredevil stunts – but it’s all flowing together to the same end. Under Running Laughter is a story of God’s healing and redemption, taking broken and sin-scarred humans and filling them with His goodness and love.